Here are musician Ken Beasley’s top music picks on the Lower East Side this week:

Light artist Joshua White has been creating live work with musicians in New York for decades, working with the likes of Frank Zappa, The Doors, and Jefferson Airplane. An almost perfect creative relationship, the music compliments the light design and the light design compliments the music. Now years since those early, groundbreaking shows, White continues his work, filling out a residency at the Abrons Arts Center’s landmark Playhouse. Bouncing genre to genre, White is collaborating with a different set of musicians each night. Friday night finds him teaming up with the mad hatter tunes of Silver Apples, and Brooklyn super-rockers Oneida.

When Randy Newman calls you “One of the best songwriters and record makers I’ve heard in a very long time,” is there anything left to aspire to? Fortunately, New York’s Richard Julian isn’t chasing quotes.  Julian has been insanely prolific in his writing and recording since he first moved to the city in the 1990’s. Having turned out a solid stack of albums, and collaborating with the likes of Norah Jones and Sasha Dobson, Julian is not one to look back and sigh in satisfaction. This Saturday he celebrates the release of his newest CD, Girls Need Attention, out on Compass Records. 10 tracks chronicling the painful end of a relationship, Girls Need Attention showcase all the best things of Julian: endearing lyrics, smarty-pants musicality, and that full bodied sound that makes you want to mix a cocktail, light a smoke, and rock back and forth on a porch as the sun goes down. Gotham songwriter Amy Correia opens.

Percussion Concert Benefit for The Stone – Sunday, May 16 at 8pm

Roberto Rodriguez and Susie Ibarra, of Electric Kulintang, are putting together an all-star bill of talented percussionistas to raise money for Lower East Side jazz haven The Stone. A non-profit performance space started by sax genius John Zorn, The Stone, holds a monthly rent-party to keep its head above water, and its listening audience happy. Special guests will share the stage all night, including pianist Sylvie Courvoisier and electo-beat composer Ikue Mori, to name but a few.

Splitting his time between performing and producing, contributor Ken Beasley primarily plays with his own roots/rock band, Ken Beasley & Co., as well as the power punk outfit Missy Sport, while also curating the Underground at the Abrons music series on the Lower East Side. 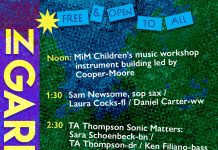