Photo: It sure looked dramatic but it was just a big pile of garbage that caught on fire alongside Essex Crossing on Clinton Street Wednesday evening. The FDNY made quick work of this dumpster fire without a dumpster.

This week’s Lower East Side news and notes:

–An Asian artist from Yip’s Dragon Style Kung Fu and Lion Dance was attacked Wednesday night near Seward Park. He had been on his way to take part in a performance in the lobby of the Public Theater. [Deadline]

–A man who told a passenger on the J train not to shoot up was attacked with a metal pipe by that passenger, police said. The suspect got off the train at Delancey Street. [New York Post]

–A huge 32-ton floodgate was installed as part of the East Side Coastal Resiliency Project. [Channel 7]

–The owner of the Lower East Side’s Hotel Indigo secures refinancing on the Israeli bond market. [The Real Deal]

–A 12-story residential tower has been topped off at 63 Pitt St. [New York YIMBY]

–Jeff Hiller, a star of the HBO show, “Somebody, Somewhere,” goes shopping for light fixtures on the Bowery, a short distance away from their Lower East Side co-op. [The New York Times]

–A photo show now in San Francisco documents the students of the Lower East Side in the 1960s. [i-D]

–The New Collossus Festival announces its schedule for over 100 acts at venues such as Mercury Lounge, Arlene’s Grocery and Pianos. [Brooklyn Vegan]

–Una Pizza Napoletana is finally reopening on Orchard Street after being shuttered in the early days of the pandemic. [Eater] 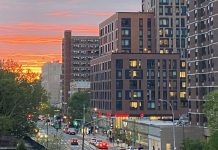 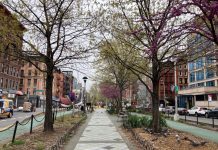 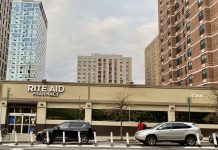