Photo: A view of Chinatown from the Manhattan Bridge.

Lower East Side news and notes from the past week:

–The East Side Coastal Resiliency Project was supposed to be a collaborative planning triumph, uniting the neighborhood’s many constituencies and city government. A deep dive in the Times looks into what went wrong. For starters, the de Blasio administration’s decision to change the plan behind closed doors, “caused a legitimacy crisis. Residents felt bamboozled. The whole consulting process suddenly seemed like a sham.” Today, the community is divided and the continuing debate raises the question of, “whose voice is most essential and should be heard in the community process.” [The New York Times]

–Take a look at the mayoral election results by election district. Eric Adams won convincingly on the Lower East Side, but his Republican opponent, Curtis Sliwa, did enjoy pockets of support across the LES and Chinatown. [The City]

–“The Tenement Museum… became the latest target of the so-called anti-woke brigade after (an) ex-employee claimed that introducing (a) Black man’s story to museum exhibits and tours would be akin to erasing the existing stories of European immigrants. Museum directors (say) that’s nonsense.’ [The Daily Beast]

–A look at the devastating impact of the pandemic through the eyes of four restaurant operators, three of them with Lower East Side ties, including Jing Fong, An Choi and Veselka. [Eater]

–Hanging out on the Lower East Side with the rapper Wiki, who just released a new album. “On weekends, specifically, (the neighborhood he calls home) turns into a playground for transplants, usually college students or twentysomethings, to get piss-drunk and scream up and down the sidewalks. ‘Shit gets me hot,’ he says as he pulls out a grinder outside of Spicy Village. ‘But I can’t leave. Someone needs to be there. Not to regulate or anything, but just to keep a piece of real New York there.'” [Pitchfork]

–A visit to the House of X in the basement of the Public Hotel: “…it felt like a carnival for adults — trippy and funny, but still there to entertain the tragically heterosexual.” [The Cut]

–Cafe Skye is a cozy new spot on Clinton Street with good drinks and tasty snacks. [Time Out] 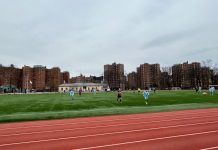 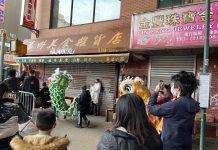 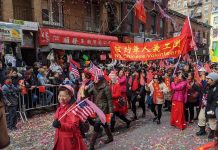