The Essex Street Market is a close-knit community. So it hit especially hard a few weeks ago when a longtime member of the market’s family, Ron Budinas, suffered a fatal heart attack. This past weekend at the Essex Street Market block party, there was a special tribute to Budinas, co-owner of Tra La La Juice Bar and Rainbo’s Fish.

Budinas and Ira Stolzenberg have been familiar faces on the Lower East Side for 40 years. It was in 1976 that they opened the fish market. Years later, the partners (in business as well as in life) added juices and homemade muffins. The heart attack happened in mid-April. Budinas, 66, was hospitalized for seven days before he died. If you’re a regular shopper at the market, you’ve probably seen the condolence cards covering the front of the stall on the market’s north end.

This past Saturday, Vendor Association President Anne Saxelby presented Stolzenberg with a certificate and announced that a new mural on the facade of thr 76-year-old building by artist Gera Lazono will be dedicated to Budinas. “It was a beautiful thing,” said Saxelby, “to hear Ron talk about the history of the market and about all the people who have been here — the wacky customers, the vendors, the whole community. His commitment and love of this market and his customers is truly special.”

A couple of years ago, the Village Voice profiled Ira and Ron. Here’s an excerpt:

It’s early afternoon at the Essex Street Market  as Ira Stolzenberg and Ron Budinas — partners for the past 40-plus years — work their adjoining storefronts, juicing vegetables for Tra La La Juice Bar and slicing fresh fish for their fish stall, Rainbo’s… Native New Yorkers, they met while working at the same fish market in Queens in 1972 where Ira’s father, Heschy, was one of the original kosher fishmongers. They’ve been together ever since, first opening Rainbo’s in a market across Delancey Street in 1976. Run and leased by the state like Essex Street is today, the neighboring market “was a mess,” Ron says. “You would go throw out your trash and see certain type of services being given midday.” When they relocated into Essex in the early 1990s, the neighborhood was still dicey. Ron recalls customers coming in the front, buying a juice and a muffin and skedaddling out the back… With their Essex Street Market (moving to a new building in 2018), Budinas and Stolzenberg say they aren’t sure what’ll come next. After four decades, it’s difficult to imagine the market — or the neighborhood — without them. 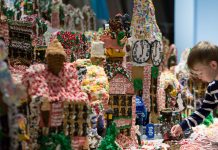