Commemorations are planned across New York this week for the victims of the Triangle Shirtwaist Factory Fire. The tragedy 105 years ago took the lives of 146 workers, most of whom lived on the Lower East Side. Here’s a look at some of the events that will be taking place in the area.

–The official commemoration is Wednesday at the site of the 1911 fire. Participants, including labor organizers, will gather at 11:30 a.m. at Washington Place at Greene Street.

–On the actual anniversary, Friday the 25th, volunteers will fan out to “inscribe in chalk the names and ages of the Triangle dead in front of their former homes.” You can learn more information about the project here.  Among those taking part will be a group from the Stanton Street Shul. If you would like to join them send an email to: tinfo@stantonstshul.com.

—The Stanton Street Shul will also be holding a special kaddish for the victims this coming Saturday. The prayer for the dead will be recited at the regular morning Shabbos service at 930 a.m. The kiddush, featuring traditional Eastern European foods, will take place afterwards. The modern Orthodox synagogue is located at 180 Stanton St.

The Triangle Fire was the deadliest workplace tragedy in New York City history. It was the catalyst for sweeping reforms in worker safety nationwide. 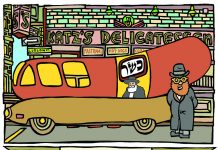 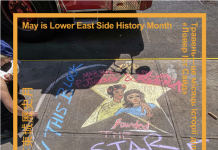