After 13 years on the Lower East Side, Molly Spaulding decided to close Narnia, her vintage shop at 161 Rivington St. The last day was Sunday, although some special events will be coming up before she turns over the keys to the landlord at the end of June. Narnia has a larger space in Williamsburg that will remain open.

In a phone interview the other day, Spaulding said it has been difficult to keep two stores going. The Williamsburg outpost opened in 2012. “Part of it is that I’m tired,” she explained. Unlike many other small business owners who have shuttered, Spaulding said rent increases were not the primary reason for her decision. The Brooklyn space is larger, it has a backyard and, she said, “it benefits from a fair amount of foot traffic.”

When Narnia opened on Rivington, in a space just to the west of Clinton Street,” there were very few (if any) newer businesses. Most everything was a reflection of the pre-gentrified Lower East Side. Spaulding expected that shoppers would slowly drift over from Orchard and Ludlow streets, where there is a higher concentration of boutiques. “It sort of happened,” Spaulding said,” but “that kind of fizzled out after a couple of years.”  The shop continued to be viable, however, because her customers – and vintage shoppers in general – tend to be loyal and willing to go off the beaten path.

If you would like to visit Narnia in Williamsburg, it’s located at 672 Driggs Ave. 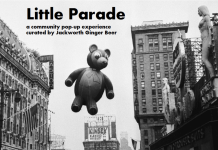