Momofuku Noodle Bar: Still Crazy (Good) After All These Years 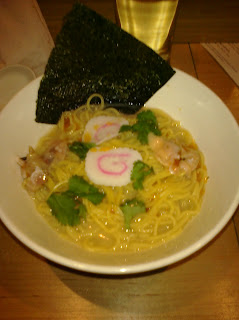 Our food contributor, Mitch Weinstein, is back this morning with a love letter to an old favorite withstanding the test of time, Momofuku Noodle Bar.

Confession…my Momofuku mojo was, is and will probably always be for Noodle Bar. Back in 2004, eGulleteers (including me) were mostly ecstatic over the new ramen joint in the Eat Village. I’ve remained so, even as Ssam, Ko and Milk Bar have joined the Changpire and been raved about. Back in the day, Chang may have cooked for us…I definitely recall him berating some unlucky newbie cook or waitperson every now and then.

Significant Eater and I spent many a Saturday or Sunday afternoon lunch sitting at the counter, watching the cooks and enjoying our noodles, buns, and as time went on, various other wondrous dishes that appeared from out of the small (and then bigger) kitchen.

So, SE and I decided, what better way to start the new year then to check out Noodle Bar for a Saturday lunch? Especially since noodles signify longevity in many Asian cultures. Noodles and sodium, I think. By the way, if you’re gonna go to lunch on a Saturday or Sunday, go early or be prepared to wait. While we were seated instantly, by the time we left, the crush was in full throttle at the “host’s stand.”

This particular Saturday (the first one of the year), SE and I lucked into a fine prix fixe menu, consisting of 3 courses for $20. Now, when the first course is a Momo bun, and the second is a Momo ramen, and then they’re throwing in dessert (ice cream), that’s pretty much what we ordered. Oh, we also got 3 tamales, because we noticed them on the blackboard menu after we had ordered, and when Noodle Bar is making tamales, guess what? Order them…they were great (pork kimchi, Sichuan sausage and jalapeno queso), for those who need to know.

So, the prix fixe actually started off with a bit of an amuse. So small, a tiny piece of apple topped with something I can’t remember – perhaps some dried bonito shavings? Then, the bun. This day it was a pan fried skate bun – and who would’ve guessed that it would be almost as good as the seminal pork bun – almost… 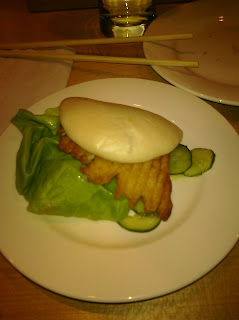 And the ramen? This was a ramen we hadn’t had before; it was clam ramen, and you don’t see that too often on a menu. The clams, shucked right before our eyes, were just heated by the miso broth. The miso broth, slightly clammy (in a good way), was one of the best I’ve tasted in a long while. A great way to start off the new year, indeed.

Add some ice cream, and then a fifth course (!), a little dessert to take home – carrot cake truffle, and Significant Eater and I walked the mile and a half back to our apartment, a little bit full and a lotta bit happy. Longevity indeed – thanks, Noodle Bar. You’ll always be our No. 1.

Mitch Weinstein writes about food and other topics on his blog, Tasty Travails.