Celebrating Sukkot: All About the Lulov and the Ethrog

The Lower East Side. Division and Canal. At one point in it’s storied history, the ethrog (etrog) center of the universe. Just look at this sign, and tell me differently… 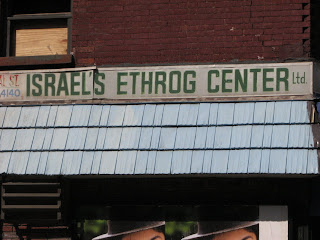 Now, of course, times have changed. I mean, directly across the street from where that picture was taken, lies this teeming scene any other time of the year… 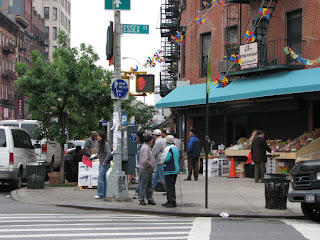 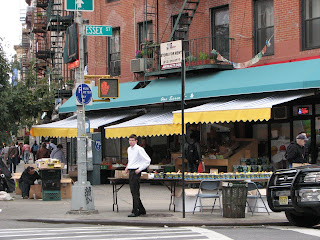 That’s the corner of Essex and Canal – where a bustling Chinese street-market stands in contrast to the aforementioned etrog (and lulav) center and sellers. By the way, the whole two ways of spelling etrog/ethrog is something I never really understood, but it may have something to do with different ways of pronouncing it…and I’m going with etrog from here on.

Every year, when the holiday of Sukkot rolls in (a cool holiday, because it celebrates the harvest and locavorism), the etrog
and lulav sellers come around our neighborhood to sell their wares. In and amongst the Chinese street markets, there are still a few storefronts along Essex Street that make it seem not so unlikely: 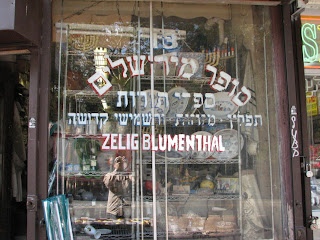 Now, what are a lulav and an etrog? To put it simply, they’re two of the symbols that are used in the 7-day celebration of the Sukkot festival – the other being the Sukkah itself. Here’s an even better description of the lulav and etrog, from mazorrnet.com:

A lulav is a slender palm branch that is held together with two willow branches and three willow branches. An etrog is a citron that looks mostly like a misshapen lemon but smells like heaven. The branches and fruit are waved each day of Sukkot, except on Shabbat, in a specific manner for a variety of reasons.

That’s the lulav – which is a palm branch, and here’s the etrog: 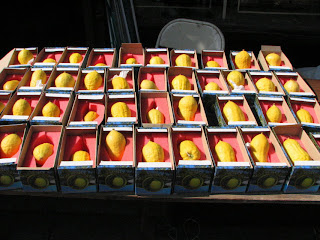 The etrog is very important. It appears more important – doesn’t it? It’s cooler looking and I’m sure it’s tastier. I bet you could even make a cocktail from it. And if it wasn’t very important, there wouldn’t be rules like this, as I like to call it “The Etrog Rule:”

Some etrog varieties arrive with a pitom, the stamen left over from the etrog blossom, protruding from the top. Be careful with the pitom. Should the pitom fall off, the etrog is no longer considered whole and should not be used for the mitzvah of waving the lulav.

Watch your pitoms, kids. You know, the etrog needs to remain in good shape for the duration of the holiday as the branches and fruit are waved together each day, in a Sukkah. Sukkahs (or is it Sukkot?) pop up all over the lower east side before the holiday; as a matter of fact, our buildings put up two really big Sukkahs. Here you can see one on part of what used to be Hester Street… 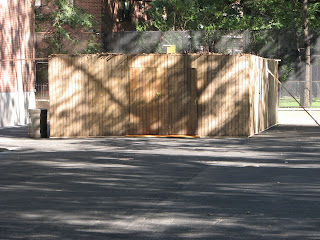 What is a Sukkah? A sukkah is a booth of sorts, a construction of a one-room abode where holiday-observing Jews dine, entertain, and some even spend the nights, for seven days each year. The origin of this ritual is biblical. God instructed the Jewish people to construct booths. “You shall live in booths seven days. All citizens of Israel shall dwell in booths” (Levitcus 23:42).
God forbid, seven days with your family in a one-room hut. Anyway, the reason for the sukkah is symbolic, as is pretty much everything on most religious holidays (see birth of various peeps, if you don’t believe
me). It symbolizes how:

During the busy harvest season, farmers would build temporary shelters in the fields to save themselves the trouble of heading back home for rest. They also did this to act as human scarecrows as their presence would help keep thieves at bay. The sukkah is reminiscent of these harvest huts. Modern scholars have argued for the validity of the sukkah’s agricultural roots because the leafy covering stipulated in sukkah construction codes are more similar to huts farmers would build than to the heftier huts nomads would need. I can just see those modern scholars arguing now. But really what should be argued about is how come the guy whose etrog and lulav I snapped pix of was charging $25 for the set, while right up on the corner, another was willing to make me a deal at $20. Hah – just like the old days.

Oh, and if I was going to make a cocktail with that etrog, it would probably be something along the lines of an aviation…so let’s call it the…

4 oz. Gin – Beef, Tanq or Plymouth here, please
1.5 oz. etrog juice – even though I have no idea what it tastes like, but let’s hope lemon
3/4 oz. marashino liqueur
2 tsp. Creme Violette (optional)

Mitch Weinstein writes about food and culture on the Lower East Side for The Lo-Down and for his own blog, Tasty Travails.