A Fuzhou Supermarket on the Lower East Side

Editor's note: Mitch Weinstein of Tasty Travails
wanders the streets in and around the Lower East Side, in search of
interesting food finds. Here's his latest dispatch, tailor made for the
dog days of summer.

Back in the day (oh, say 1970), NYC's Chinatown was a fairly easily
definable area, roughly bordered on the north by Canal Street, east by
the Bowery, south by Worth Street and west by Baxter Street.

When
we were high schoolers who wanted to come "into the city" to eat in
Chinatown, we went to Mott Street, the center of it all. That was
Chinatown to we Long Islanders.

Now of course, Chinatown
encompasses a much larger area, with no definable borders at all, or at
least with borders that are constantly changing. Our building, actually
on the lower east side right next to Seward Park, could almost be
considered to be in Chinatown…but I prefer Chinatown to be considered
in the lower east side. Whatever, it doesn't really matter – because
for food lovers like Significant Eater and me, it opens an exciting
world just outside our front door – no need to travel halfway around
the world, that's for sure. Or even to Mott Street any more.

For
instance, just around the corner, near the East Broadway subway
station, I came upon this bustling market at the corner of Henry and
Rutgers Streets: 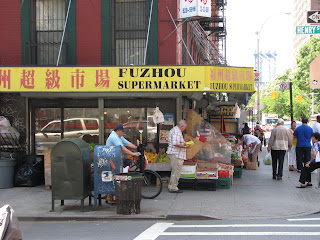 Fuzhou
is the capital of the province Fujian, from where many of the newer
immigrants to Chinatown arrived, and is also the home of one of the
four traditional cooking styles of Fujian cuisine, which in turn is one
of the eight recognized regional Chinese cuisines – whew – thanks, wiki. From Chinadaily.com:

Generally
speaking, Fujian dishes are slightly sweet and sour, and less salty,
and often use the red distiller's grain for flavoring.

Whatever that all means, I happen to like the store and it's display of vegetables. Look at those amazingly low prices… 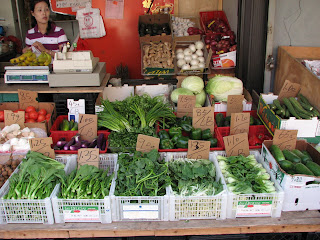 Vegetables
like this can even get me into the kitchen on hot, sweltering days
(like today), because to cook Chinese doesn't necessarily involve
heating up our whole apartment like some other methods might…most of
the work is in the prep, the actual cooking can take place very
quickly, especially if you're not preparing soups or roasting whole
animals.

Whenver I'm getting ready to stir-fry a couple of
dishes, I make myself a plate of the holy trinity of Chinese cooking
that is garlic, ginger and scallions – now don't show this to Daniel or
Eric or any of those other fancy French chefs, because it probably
would be tossed, but for SE and me, and you, it's just fine. 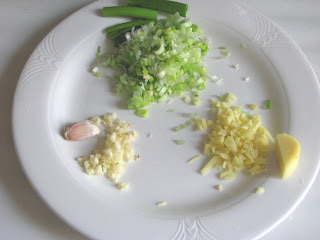 For
a stir-fry of vegetables, the next step is to heat a wok till it's very
hot. Very hot. Then, a tablespoon or two of oil (peanut or something
with a high smoke point) is swirled around followed quickly by however
much of the 3 ingredients above (a good teaspoon of each is nice)
you're using, then the vegetable which is tossed and turned, exposing
it all to the heat of the wok. I usually add a little (say, 1/4 cup) of
homemade chicken stock seasoned with a bit of soy and sugar and cover
and steam the dish for a minute or two. Uncover, let the liquid boil
off, and you're pretty much done -here are some of those baby bok choy
cooked in just that manner: 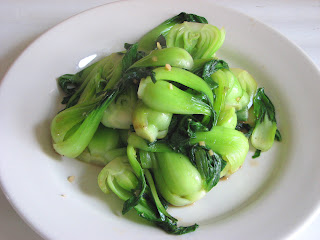 To
round out lunch for Significant Eater and me, I happened to have some
leftover rice in the fridge and that's perfect for fried rice. As a
matter of fact, it's really good for fried rice. Along with some
wild-caught frozen shrimp and some peas, and starting off the same way
with the holy trinity, it's pretty cool "living" and cooking in
Chinatown!

Previous article
Streit’s Matzo: More on Their Future in the Neighborhood
Next article
Urban Love Daily Hits The Lower East Side
- Advertisement -