Coming up on Sunday afternoon (August 15), there will be a block party at the Hester Street Fair/Hester Flea site to celebrate Christopher Marte’s election in the Democratic Primary for City Council in District 1. While there’s still a general election campaign to be run, Marte is all but assured of succeeding City Council Member Margaret Chin a little more than four months from now.

The event is being organized by the Coalition to Protect Chinatown and the Lower East Side.

“To celebrate the momentum our victory brings to coalitions of workers, residents, and small businesses across Lower Manhattan,” Marte wrote in an email message to supporters earlier this week, “we’ll be joining our friends in the Coalition to Protect Chinatown and the Lower East Side in a block party on Sunday, August 15, 2-6pm. There will be music, kids activities, and many neighbors sharing information about how to get involved in our district’s biggest challenges from SoHo to the East River.” 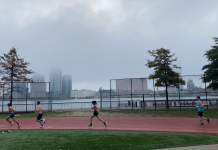