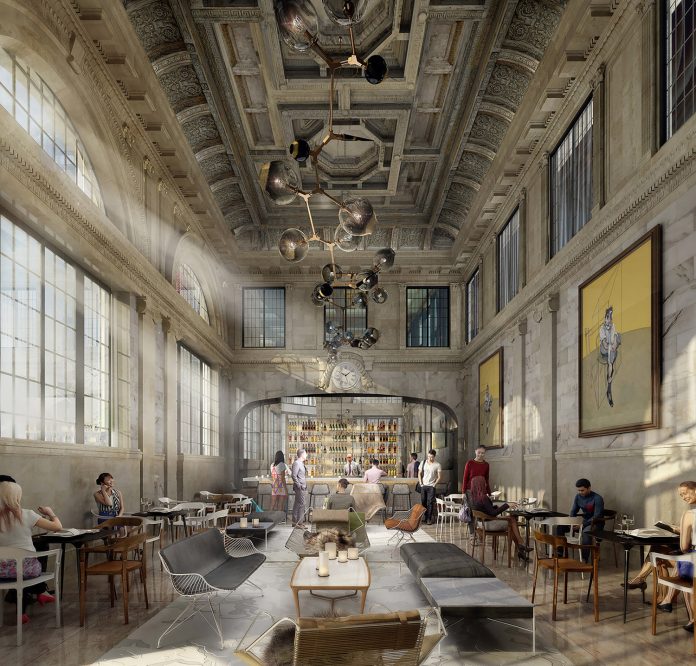 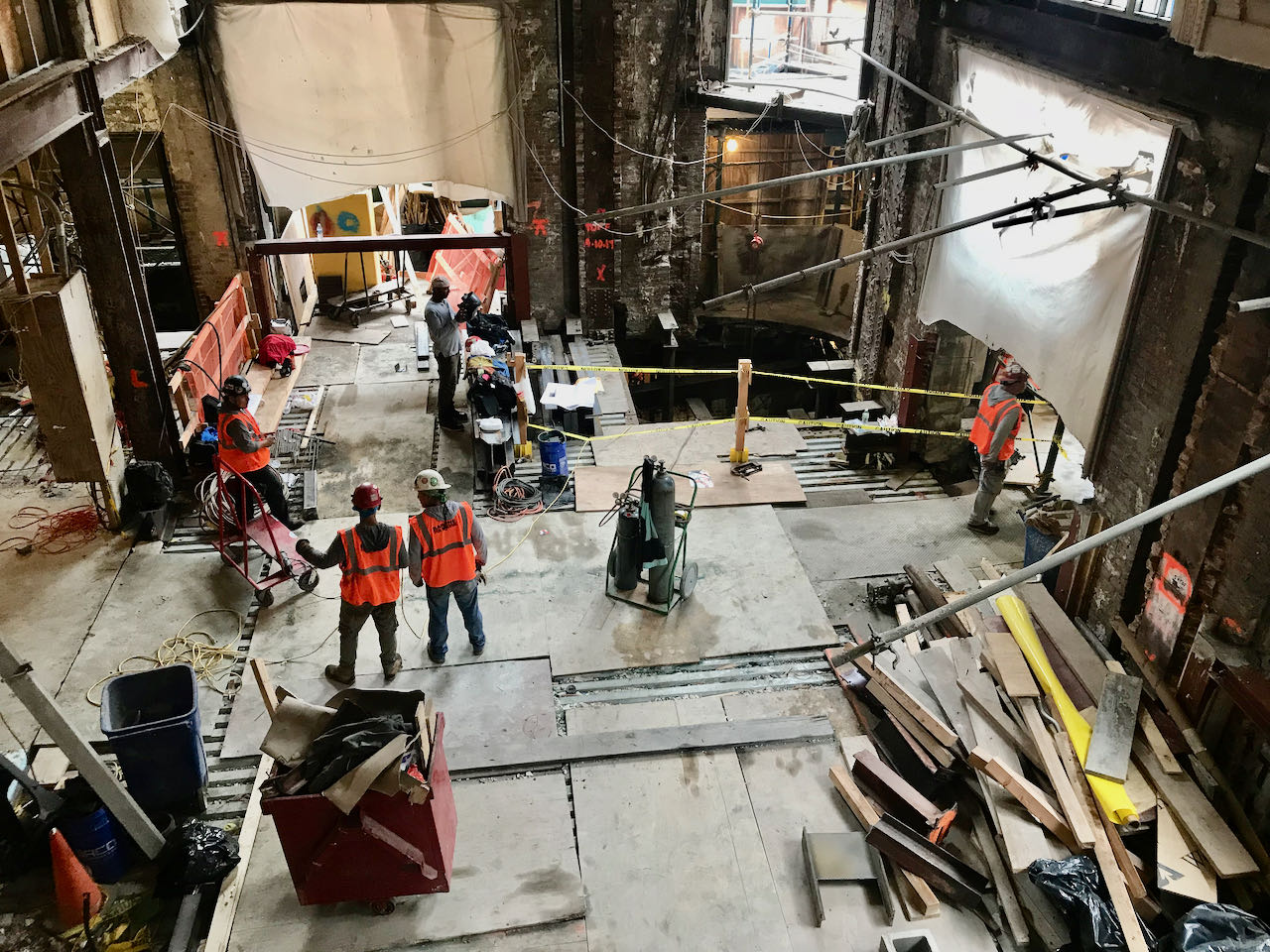 The 1912 Jarmulowsky Bank Building has been covered in scaffolding and shrouded in secrecy for several years. Now the owner, DLJ Real Estate Capital Partners, is raising its local profile ahead of the anticipated opening of a boutique hotel in the historic Lower East Side property next year.

This month, representatives from various neighborhood organizations have been invited inside the 12-story tower at 9 Orchard St. (54 Canal St.) We tagged along on one of those recent hard hat tours through the historic landmark. Our hosts were Kristen Korndoerfer of DLJ Real Estate, and Kerri Culhane, an architectural historian who has been working with the developers, and architect Ron Castellano, to make sure the restoration is historically faithful. Culhane knows the neighborhood well, having documented many of the Lower East Side’s most important buildings and serving until 2016 as associate director of the Two Bridges Neighborhood Council.

The Jarmulowsky property was purchased in 2011 by DLJ for $33 million. The owners knew the restoration project would be complicated in a city-protected landmark, but they could not have anticipated just how long and expensive the endeavor would become.

Some of those complications were due to the owners’ own decision to go beyond what the Landmarks Preservation Commission required (restoring a spire on top of the building, for example, was the developers’ call). But there were other factors, too. Extensive stabilization work was required at the cellar level. An extension of the Jarmulowsky to the west was also time-consuming. Even though it was intended to be part of the main structure, the city required the owners to build the addition as a separate building with its own certificate of occupancy). 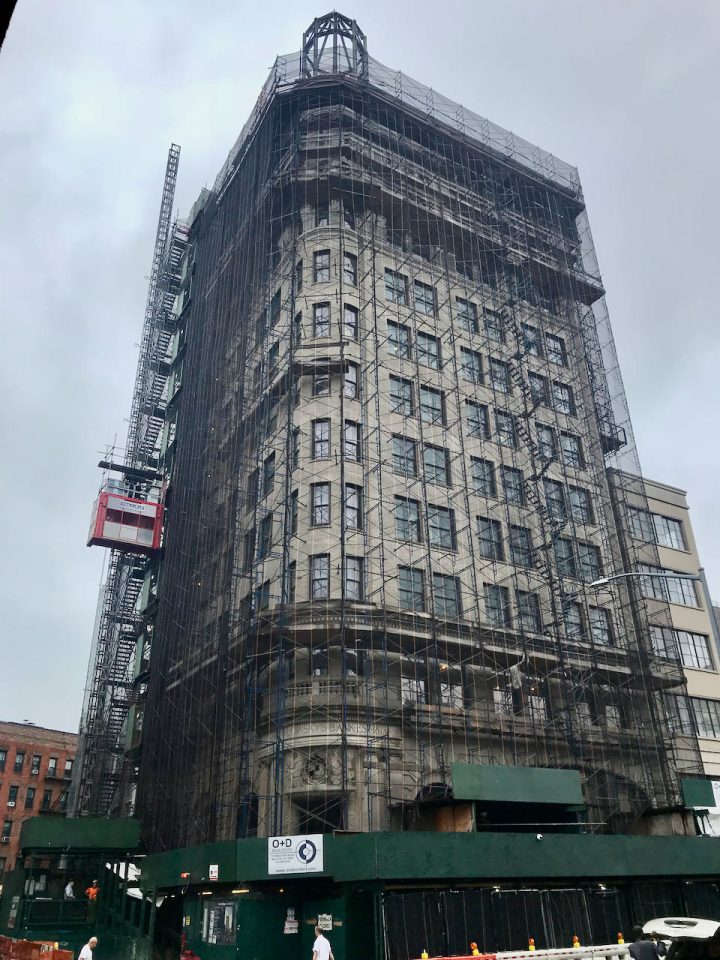 Korndoerfer said the hotel, known as Nine Orchard, is on target for an opening in the early summer of 2019. While each floor is still very much a construction zone, she explained, the most difficult parts of the restoration project have been completed. “Now it’s really a matter of putting the pieces together,” said Korndoerfer.

Overall, the hotel is meant to evoke old New York. The first floor features a soaring ceiling and beautiful arched windows. There will be a small lobby for hotel guests, with an entrance on Orchard Street, and three distinct dining/drinking spaces on the main level. They include a lounge running across the eastern end of the building, a formal restaurant and a more casual “neighborhood” restaurant opening onto Allen Street.

The team behind the food and beverage operations at the Eventi Hotel (on 30th Street) will be running the restaurants, but they won’t be offshoots of other dining establishments. The restaurants will be unique to the Nine Orchard hotel. The owners/operators have not yet sought approval from Community Board 3 for liquor permits, but that’s coming. 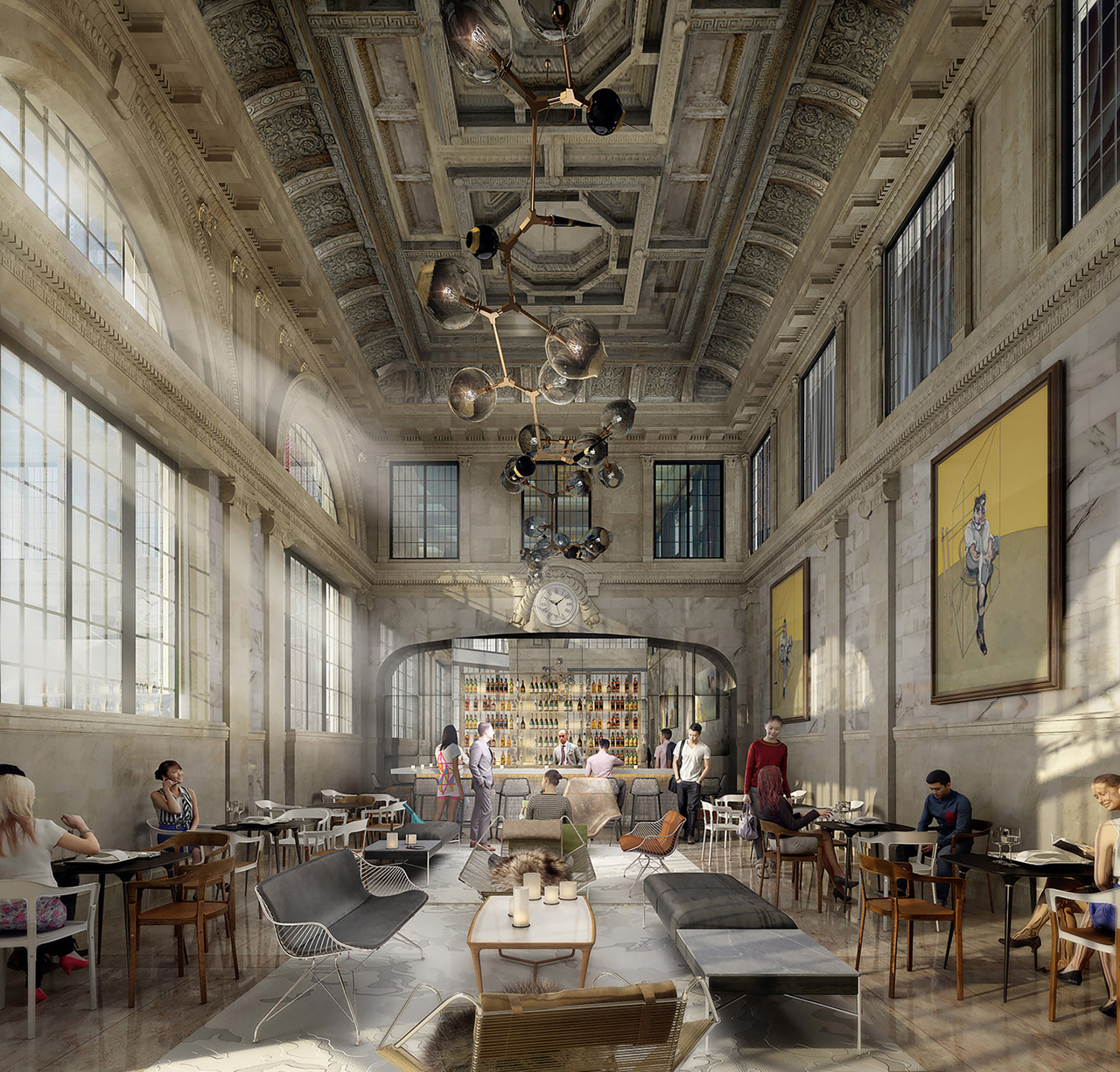 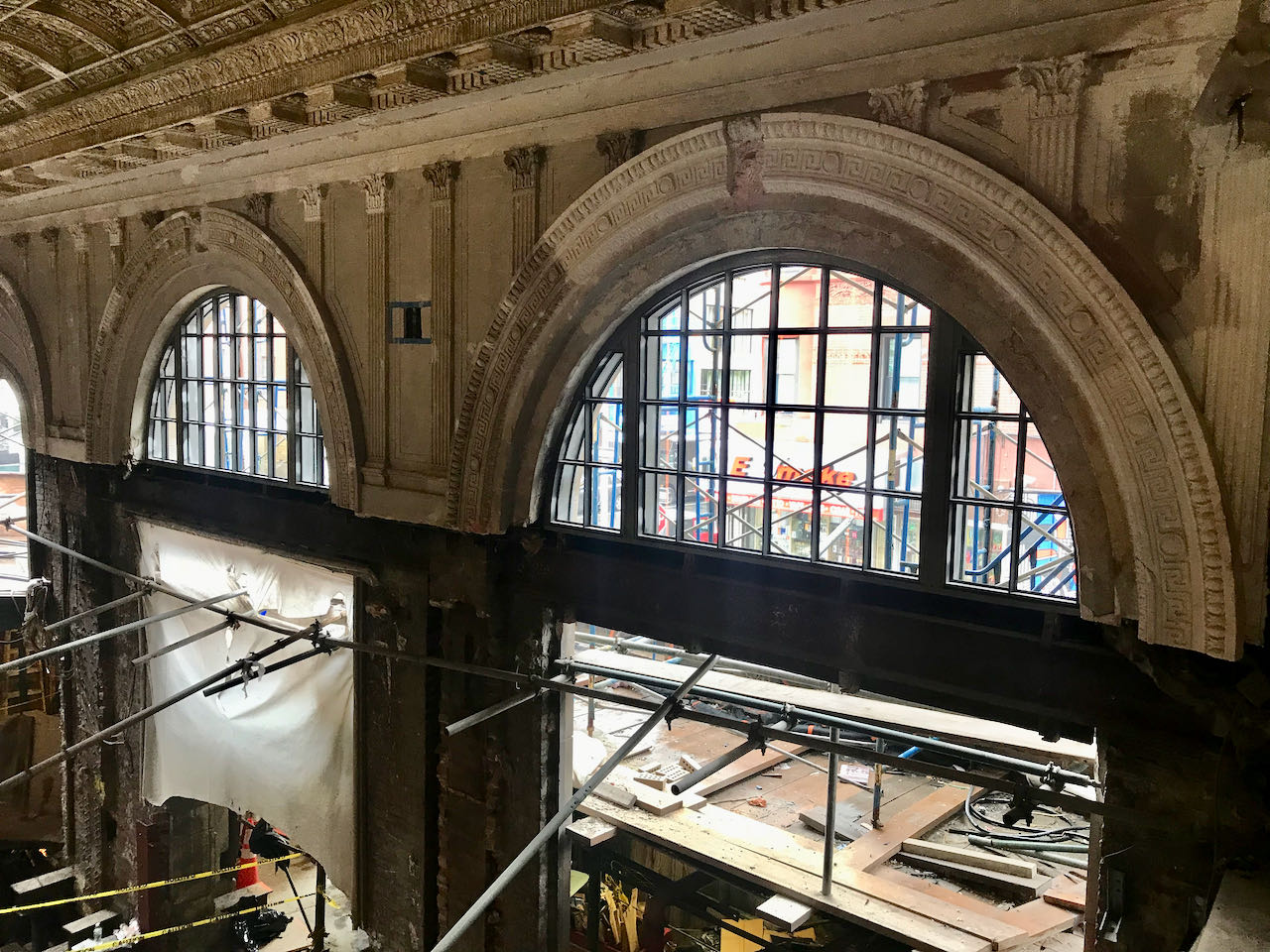 On the second floor, there are two spaces for private events. Korndoerfer said a lot of thought is being given to the flow of pedestrian and auto traffic around the hotel. Guests going to events on the second floor will enter on Allen Street, which can handle crowds more easily than Orchard. 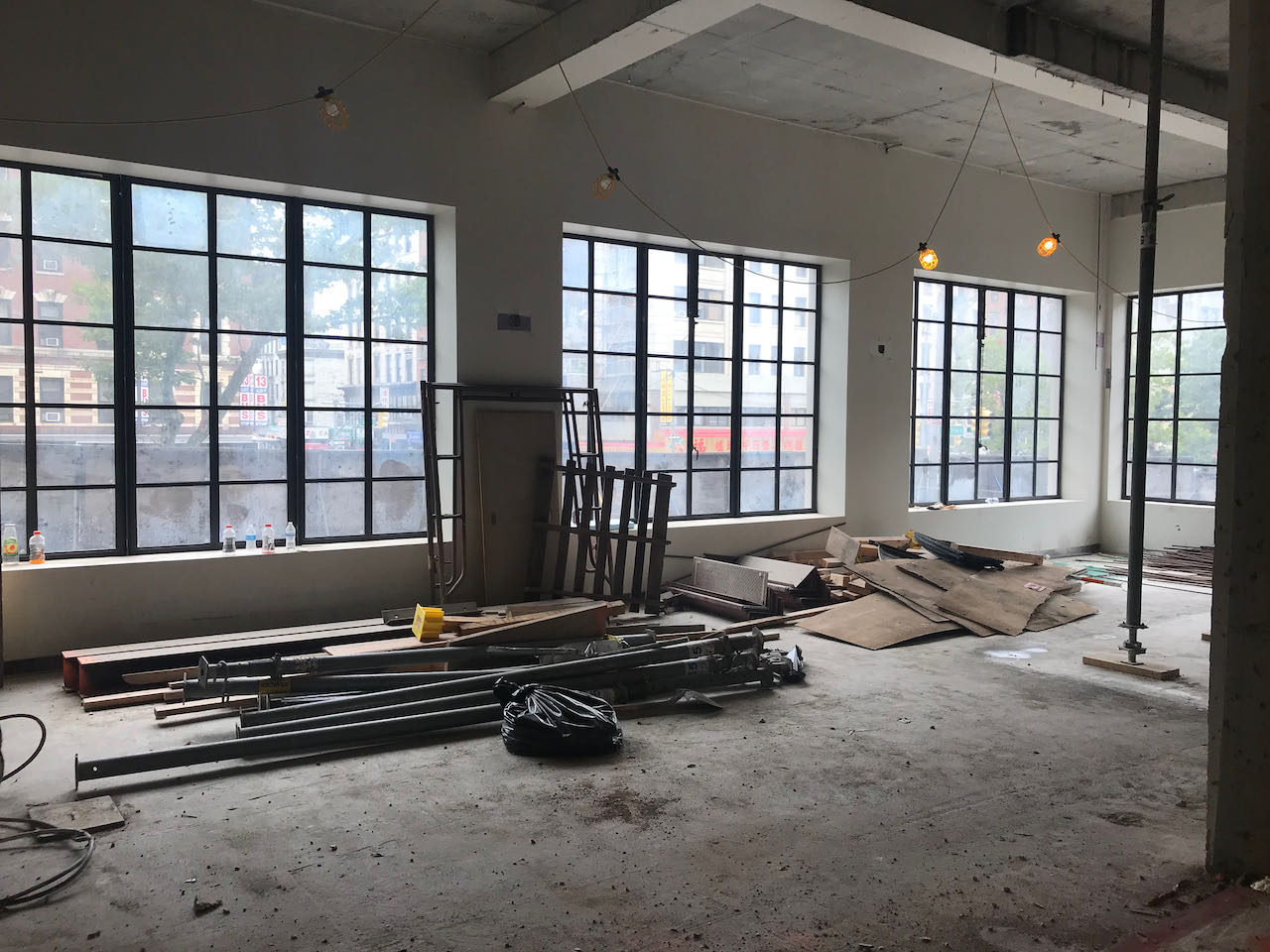 The 116 guest rooms are located on floors 3-12. Each one will be different, but all feature high ceilings, big newly constructed windows and period-style furniture (those pieces are being fabricated from antiques). 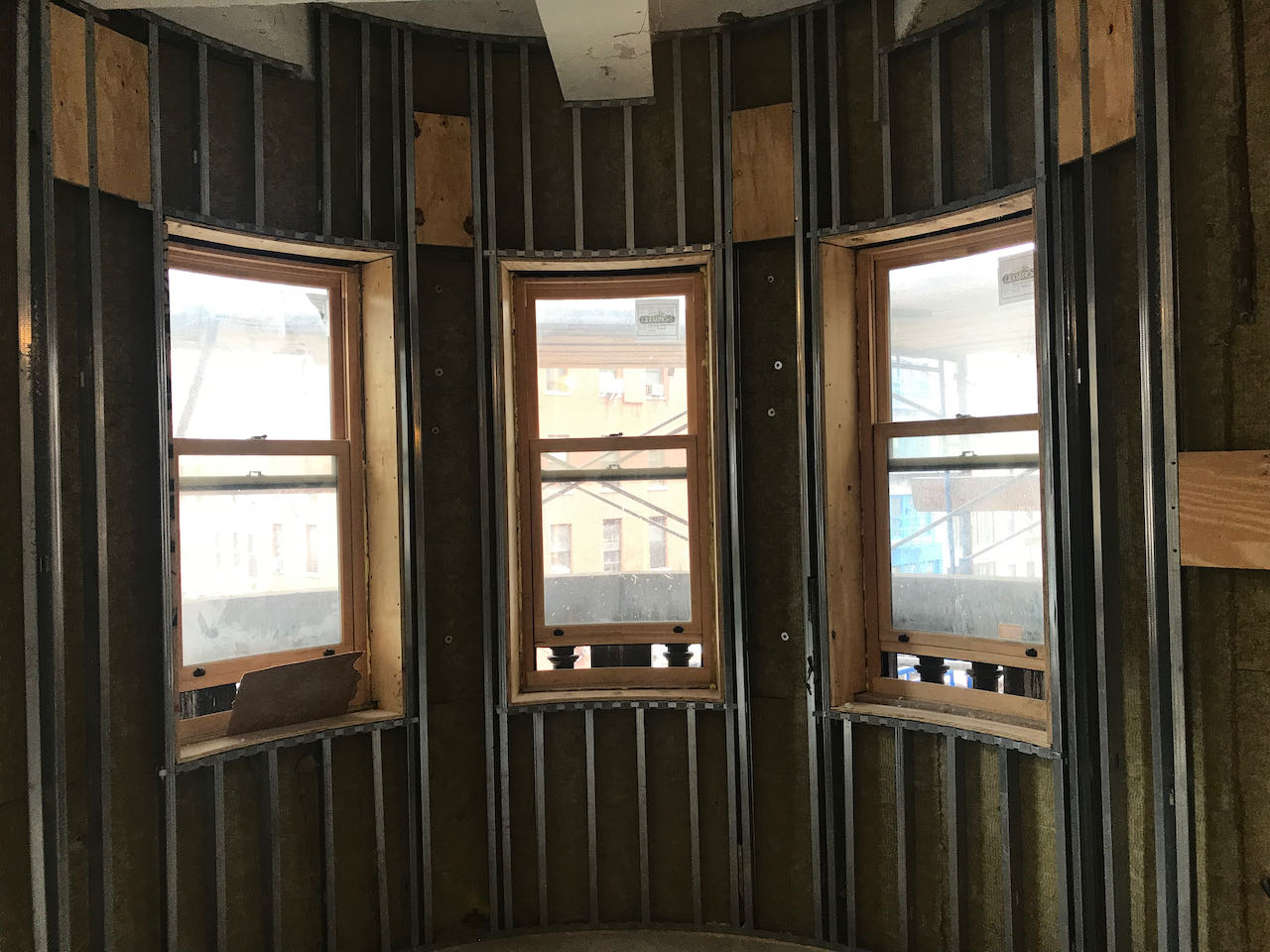 The highlight of the tour was a trip to the roof, which offers sweeping views of the Lower East Side, and the uptown skyline, even on a rainy day. 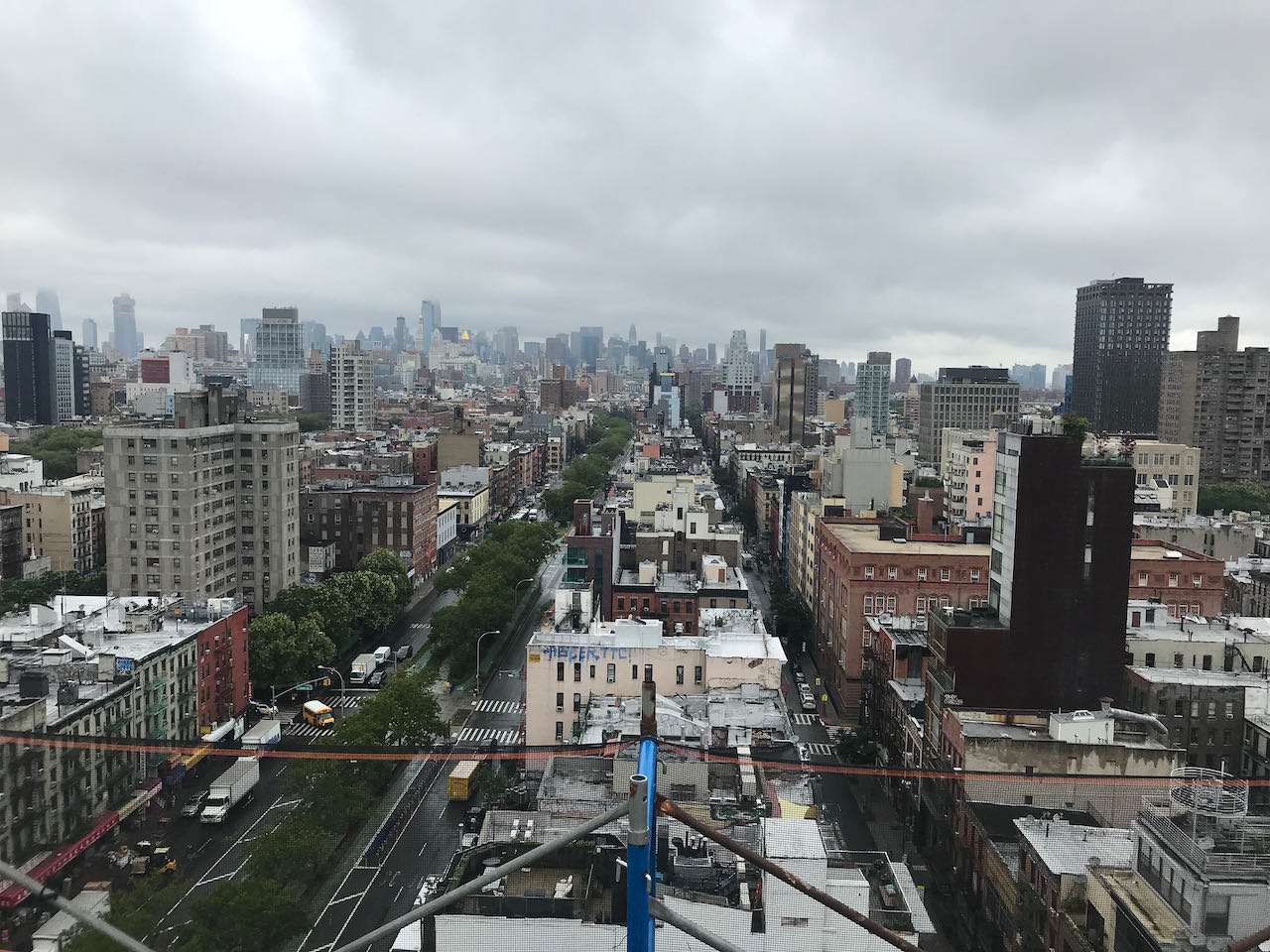 It’s also where we got a close up look at the Jarmulowsky’s 50-foot spire, which only has metal framing now, but which will soon start to take its final form.

When the building was landmarked in 2009, the Landmarks Preservation Commission described the tempietto as, “a two-story-high circular pavilion with a round dome ringed by eagles and topped by a pinnacle.” It was unceremoniously removed in 1990, which the New York Times wrote, instantly reduced the building, “from the exceptional to the ordinary.”

In her research, Kerri Culhane dug up old photographs and other details, allowing architects and fabricators to create a historically accurate facsimile. The next steps will be moving scaffolding into place, and then assembling the new terra-cotta pieces like a puzzle around the metal structure. Finally, the dome will be coated in copper. At nighttime, the spire will be bathed in white lights. There will also be a staircase that winds up into the dome, allowing people to go to the tip of the building. 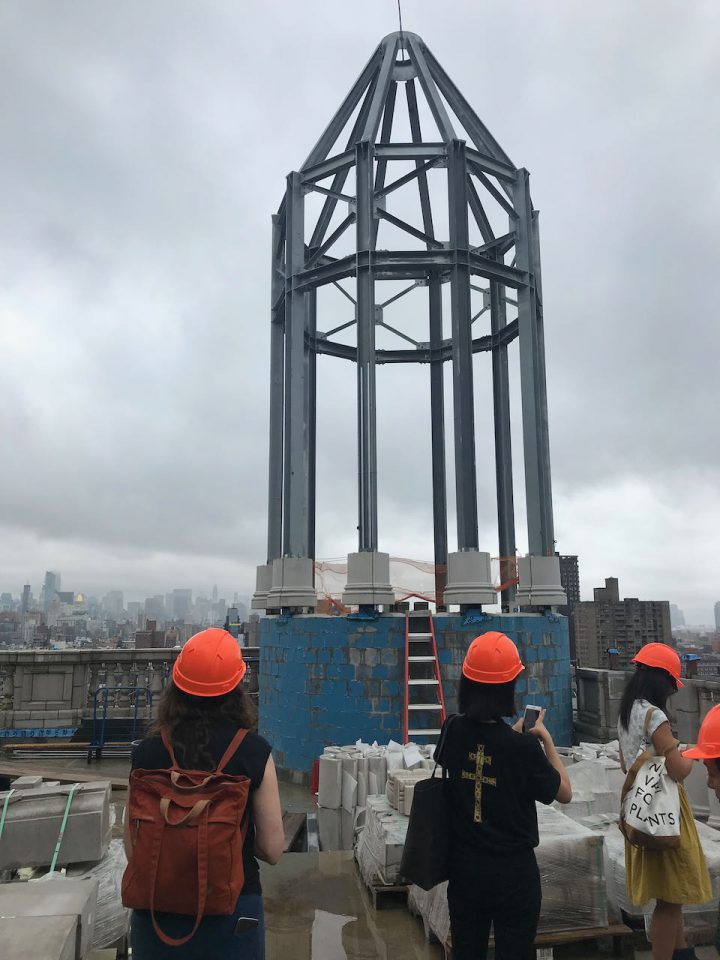 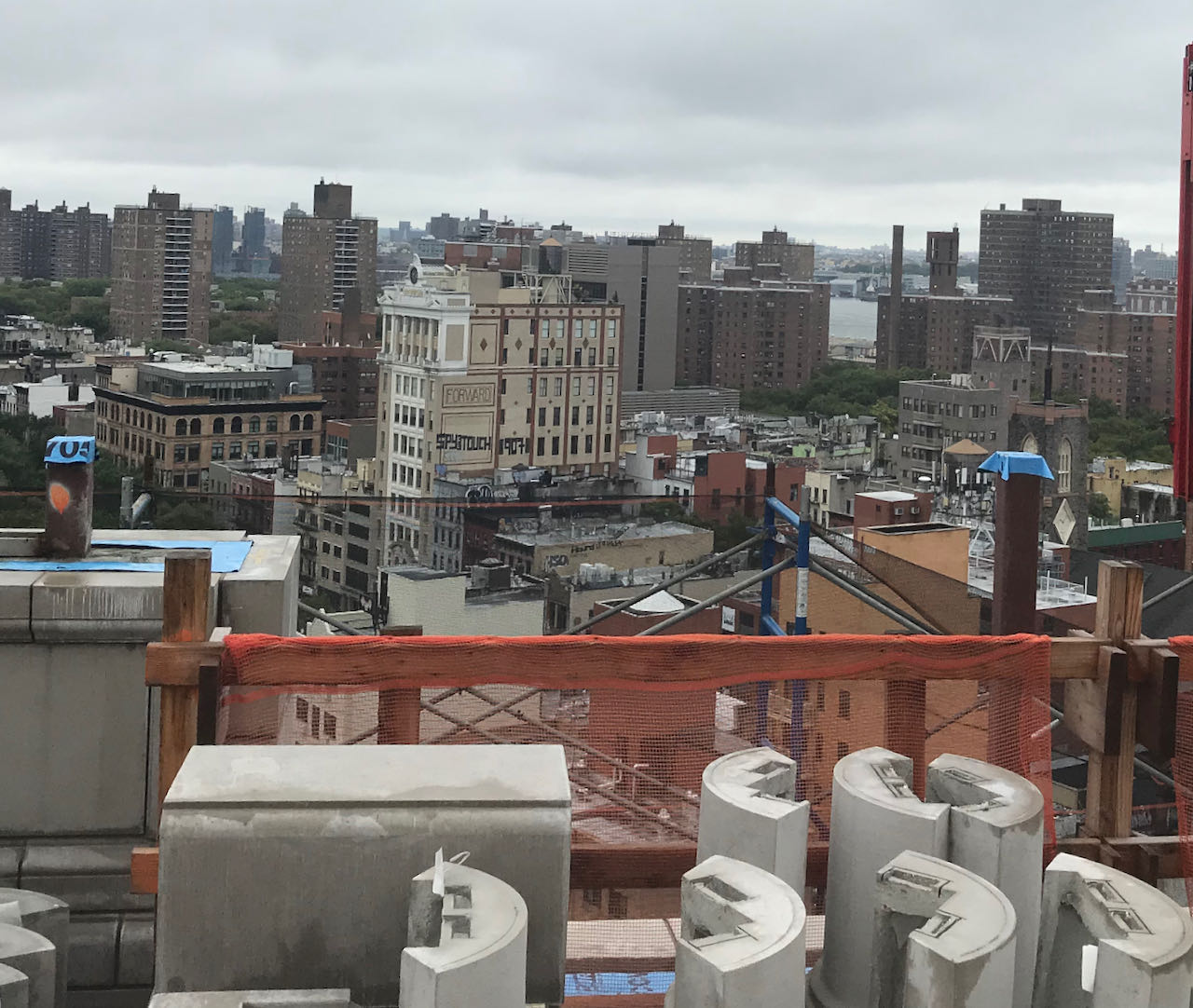 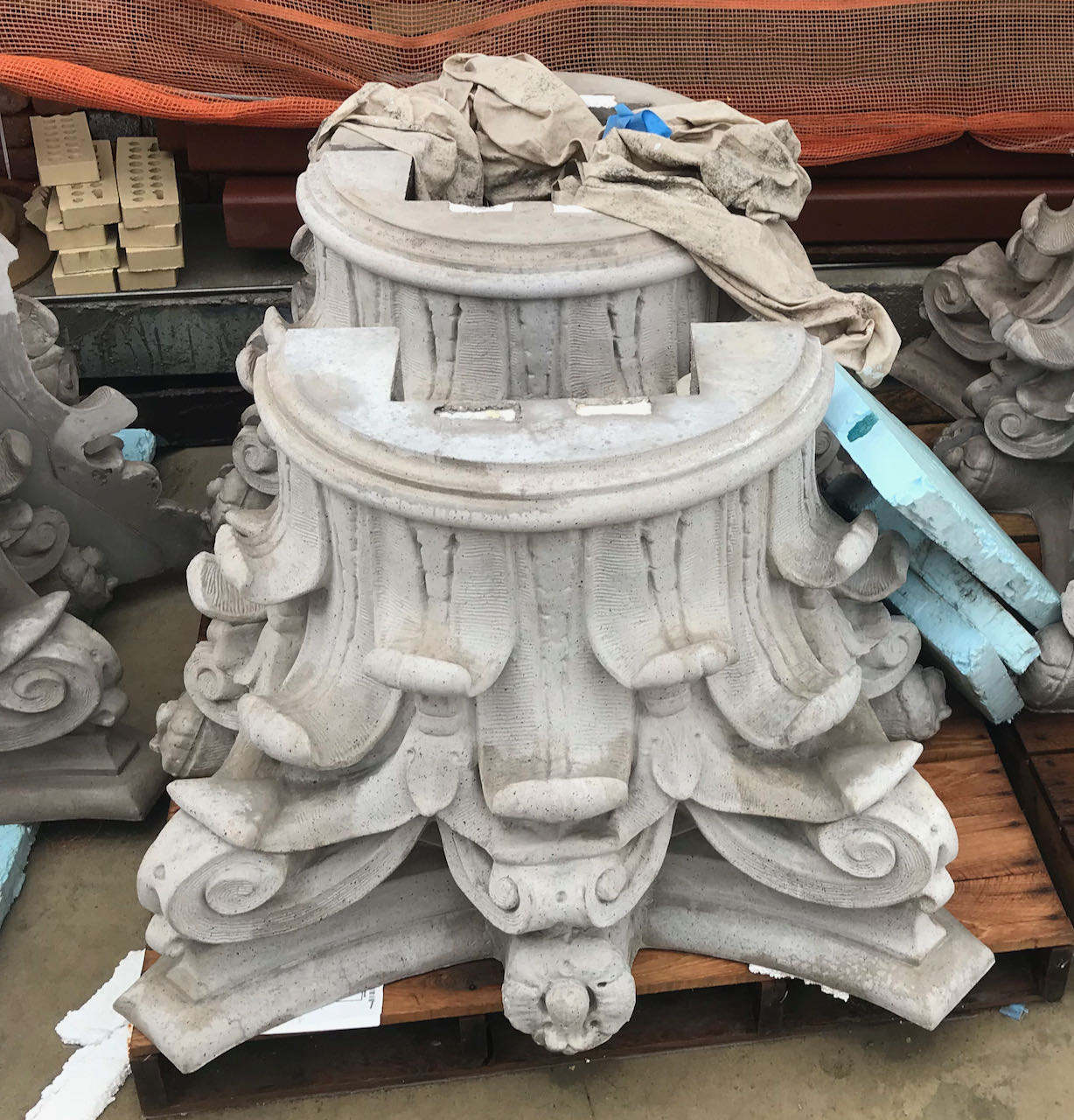 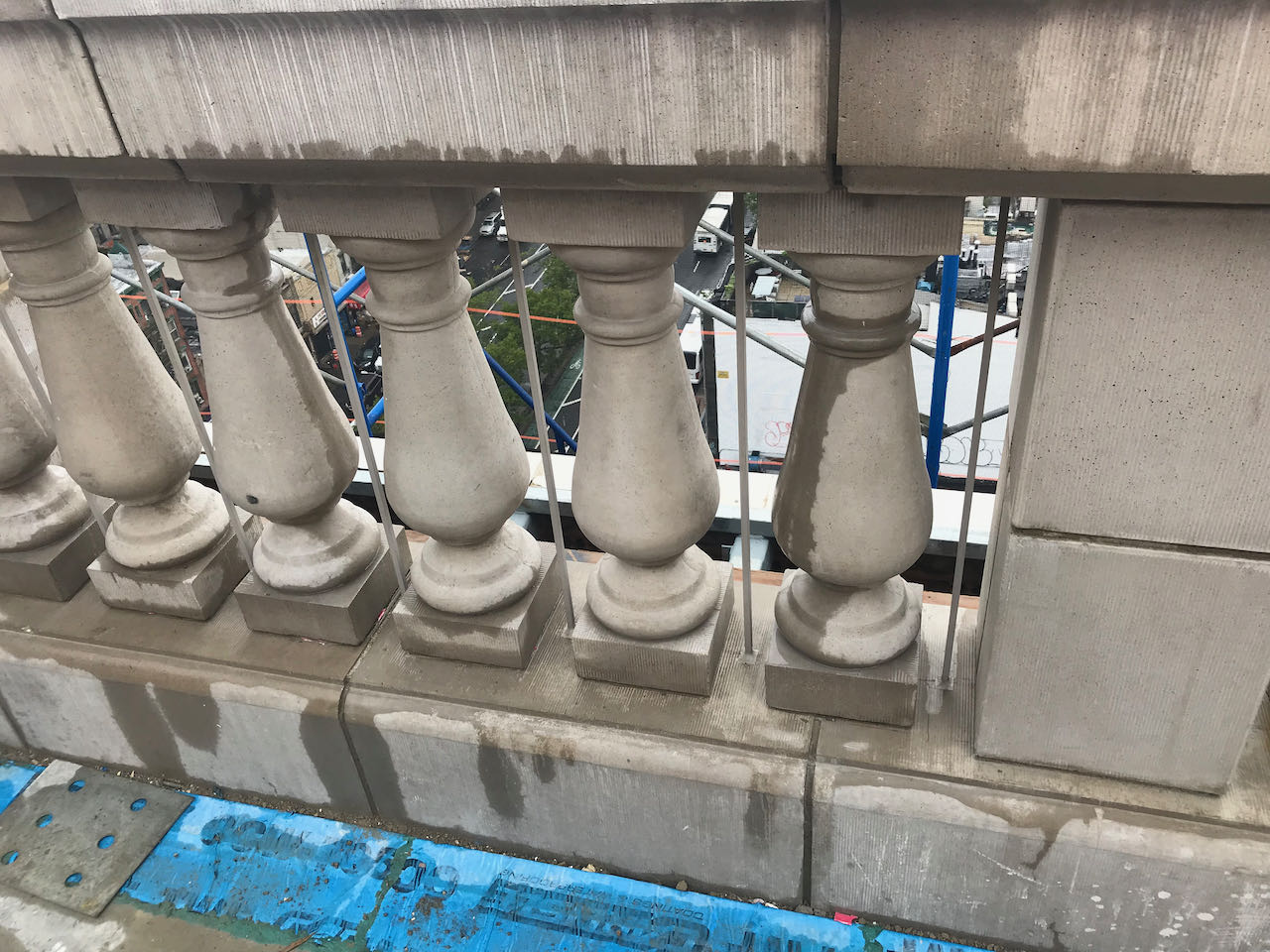 The roof has been almost completely rebuilt (it hadn’t been touched in years). There’s a new green roof, and the decorative stone railings have been recreated (some of the pieces on the roof are made of geo fiber reinforced concrete, others plastic). The space, which will include a trellis structure with an awning, is going to be reserved for private events. Korndoerfer said the owners recognize that the Lower East Side community has little interest in another rooftop bar, so they’ve decided against creating a public venue on the roof.

Over the years, DLJ has floated different ideas for the Jarmulowsky Bank Building. Recognizing that the hotel market was becoming saturated, they considered leasing the property for offices. They also thought about handing management to the Ace Hotel team. But ultimately, Korndoerfer said, they decided that a one-of-a-kind hotel, which will be unlike any other property on the Lower East Side, held the most appeal.

If all goes according to plan, Nine Orchard will be open for business at this time next year.