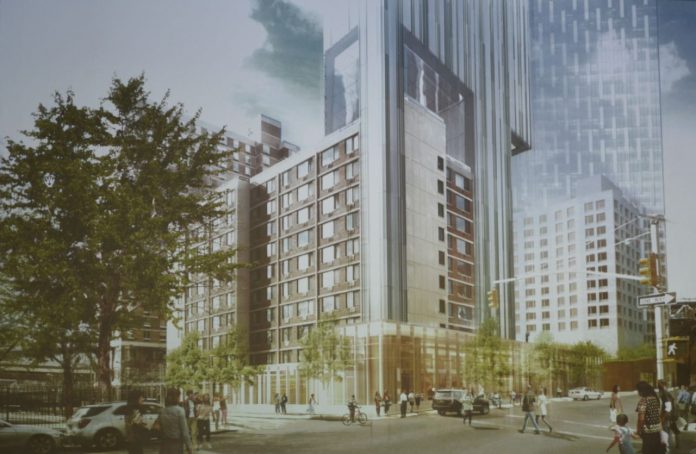 We have new information this afternoon about the potential relocation of senior residents to accommodate the construction of a thousand foot rental tower in the Two Bridges neighborhood.

JDS Development Group has publicly acknowledged that it might be necessary to move some tenants of a low-income senior housing complex at 80 Rutgers Slip. Plans call for the tower at 247 Cherry St. to be built over the senior building. The Lo-Down has learned new details about the proposal as the result of a Freedom of Information Act request filed in early January. The documents we obtained show that the U.S. Department of Housing & Urban Development offered its support for the plan in a letter dated Dec. 15.

The new revelations were not warmly received by City Council member Margaret Chin, who told us this afternoon, “I am outraged that this senior relocation plan has been given HUD support without any consultation with elected officials, the community or even the seniors that will have to suffer the impacts of this proposed building that will be constructed over their homes.”

The senior building is owned by Two Bridges Neighborhood Council. The not-for-profit organization and its partner, Settlement Housing Fund, sold development rights to JDS last year, making the new residential project possible. One-quarter of the apartments, or 155 units, will be set aside as affordable housing.

In a November letter to HUD, Two Bridges President Victor Papa and Settlement Housing President Alexa Sewell explained that it could be necessary to relocate the tenants of up to 19 apartments. Nine units, “which will have one window obstructed by the tower,” would be off-line for 12 months while full renovations take place. “Windows will be modified to maintain legally required light and air,” the letter stated, and full apartment renovations would occur. Ten additional apartments would be permanently taken off-line. JDS would provide replacement apartments in its new tower for those units. These 10 units for seniors would be in addition to the 155 rent-regulated apartments designated in the tower.

Two Bridges emphasized that it might not be necessary to move any residents. As vacancies occur, apartments are not being rented. “We are confident,” wrote Papa and Sewell, “that we will have enough vacancies in the senior building by construction start (in approximately two years) that we will not have to permanently relocate any current tenants into the new tower.”  Any temporary relocations would be accommodated in two neighboring buildings (Two Bridges Tower and Lands End II). JDS has agreed to make up the difference in the rent between the senior building (a Section 8 property) and the temporary housing units.

The letter stated that, in the absence of JDS’s plan, it would be impossible to create affordable housing in, “this high cost, high opportunity neighborhood.” Other advantages of the proposal were cited, including flood protection measures for the senior building, new laundry rooms on each floor, lobby renovations and new retail.

“Based on the information provided to us,” wrote a HUD administrator, “our office is in support of this development plan.” HUD will require a formal request when the final plan is in place.

Council member Chin has been working closely with Two Bridges and with JDS to address community concerns regarding the project. It’s one of three-large scale developments coming to the immediate area. In a statement provided to The Lo-Down today, Chin did not mince words:

This week, in response to repeated requests for information on the senior relocation plan, a representative of Two Bridges/Settlement Housing Fund responded to my office that they didn’t ‘have anything written.’  That response, we now know, was completely untrue. Furthermore, this communication between Two Bridges/SHF and HUD shows that the development team has, on numerous occasions, deliberately misled residents about the senior relocation plan for 80 Rutgers. Today, I plan to make my opposition known to HUD, Two Bridges/SHF, and the development team, and to focus on community priorities and ways to achieve those priorities by any means necessary.

Contacted regarding the Council member’s statement, Victor Papa said a meeting has been in-the-works to detail for Chin and others a relocation work plan. Public meetings and meetings of a community task force, he said, are helping to focus the not-for-profit groups on what needs to be done to address the concerns of senior residents. The plan, he said, can’t be shared until it is complete. Papa said Two Bridges is working “carefully and deliberately” to make sure the construction of the new tower impacts the senior tenants as little as possible.

A spokesperson for Chin told us a short time ago that some written materials regarding the plan had been forwarded to the Council member’s office late today.

See below for the documents made available to us from HUD.

UPDATE 2/2/2017 Here’s a statement we received from a HUD spokesman:

HUD has not issued any formal approval to relocate residents at the Two Bridges Development. Should a formal request be necessary, HUD will conduct a thorough and complete review prior to approval. Our staff look forward to working with Councilwoman Chin, the Two Bridges Neighborhood Council, and community residents as we move forward. 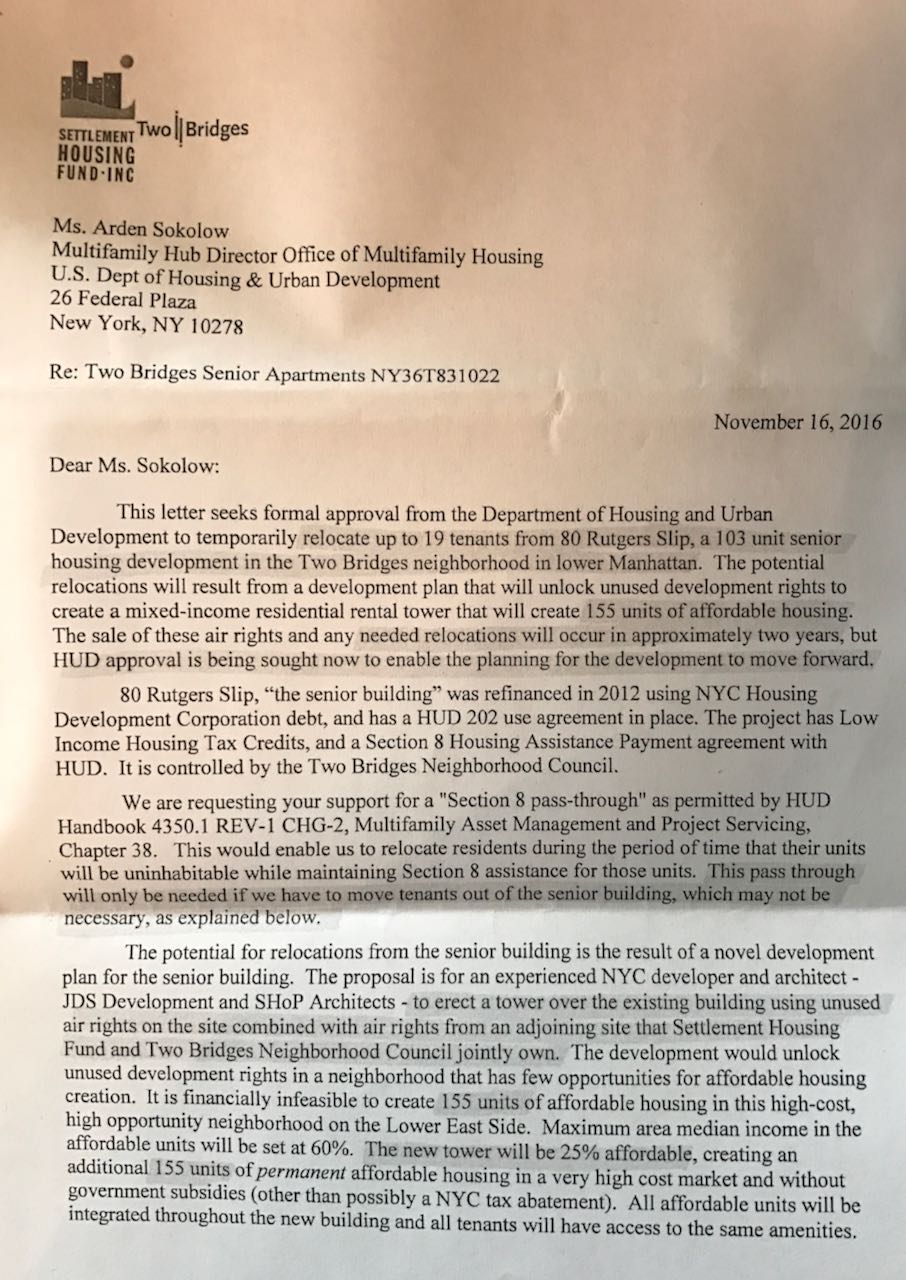 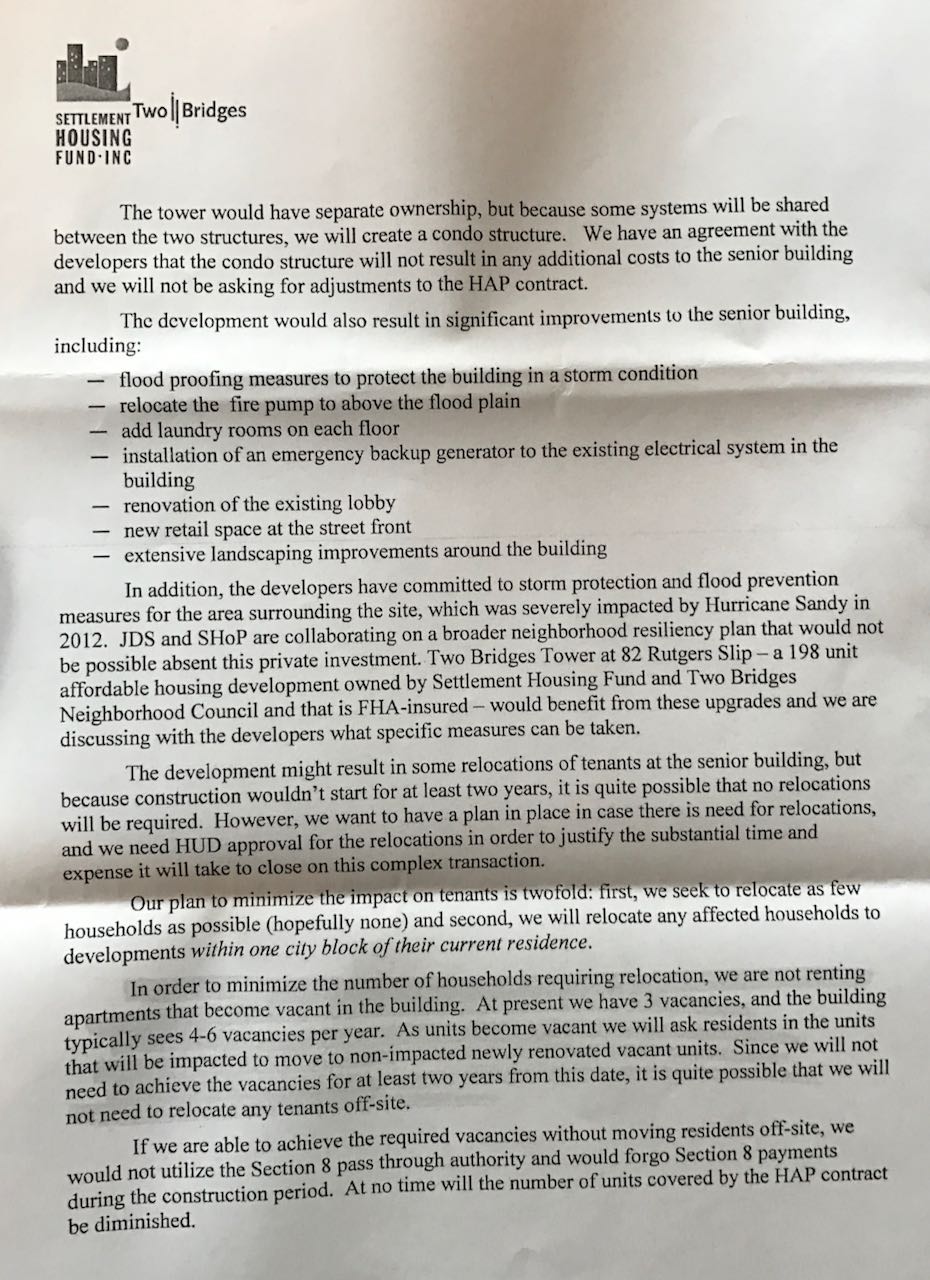 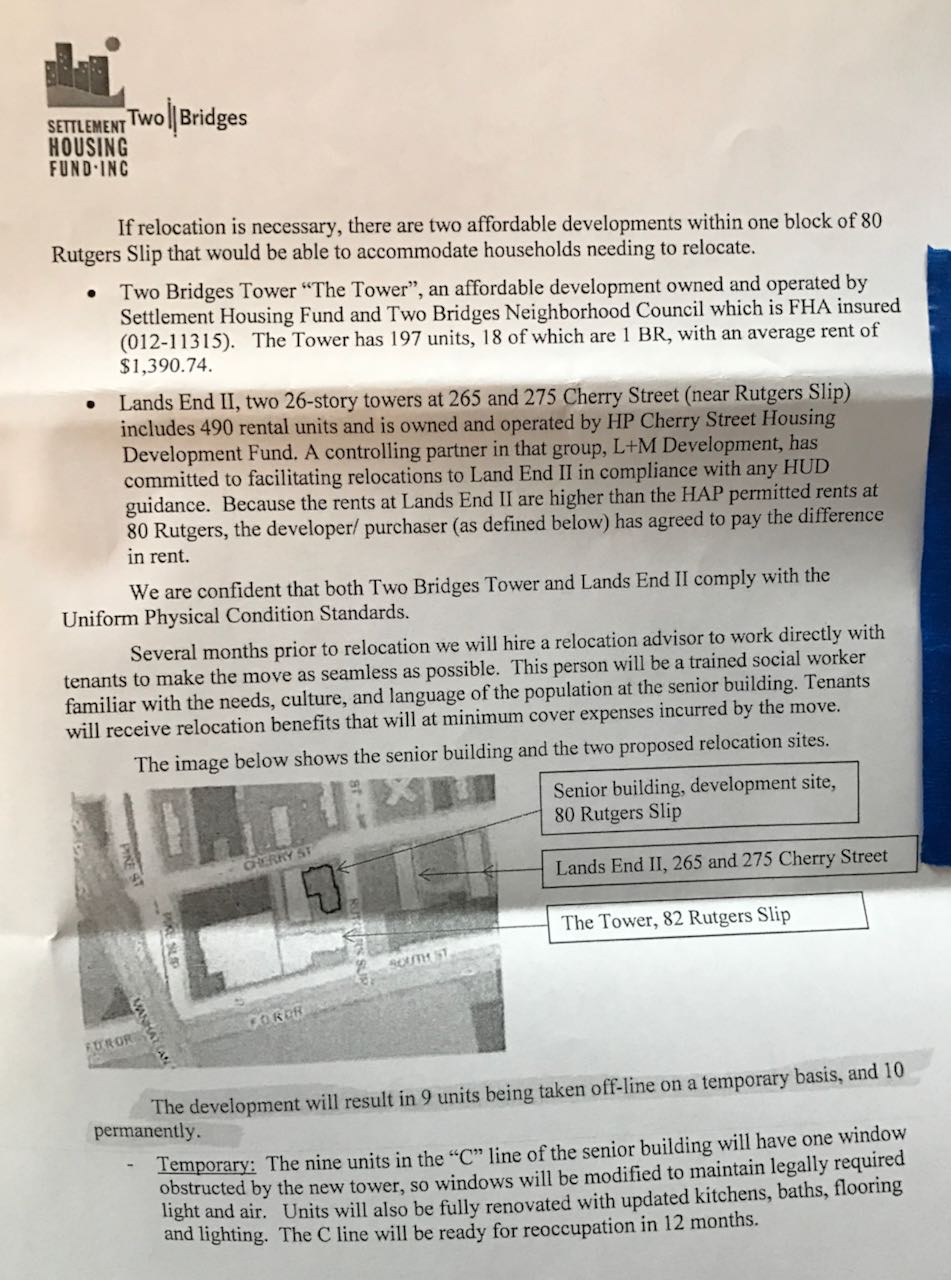 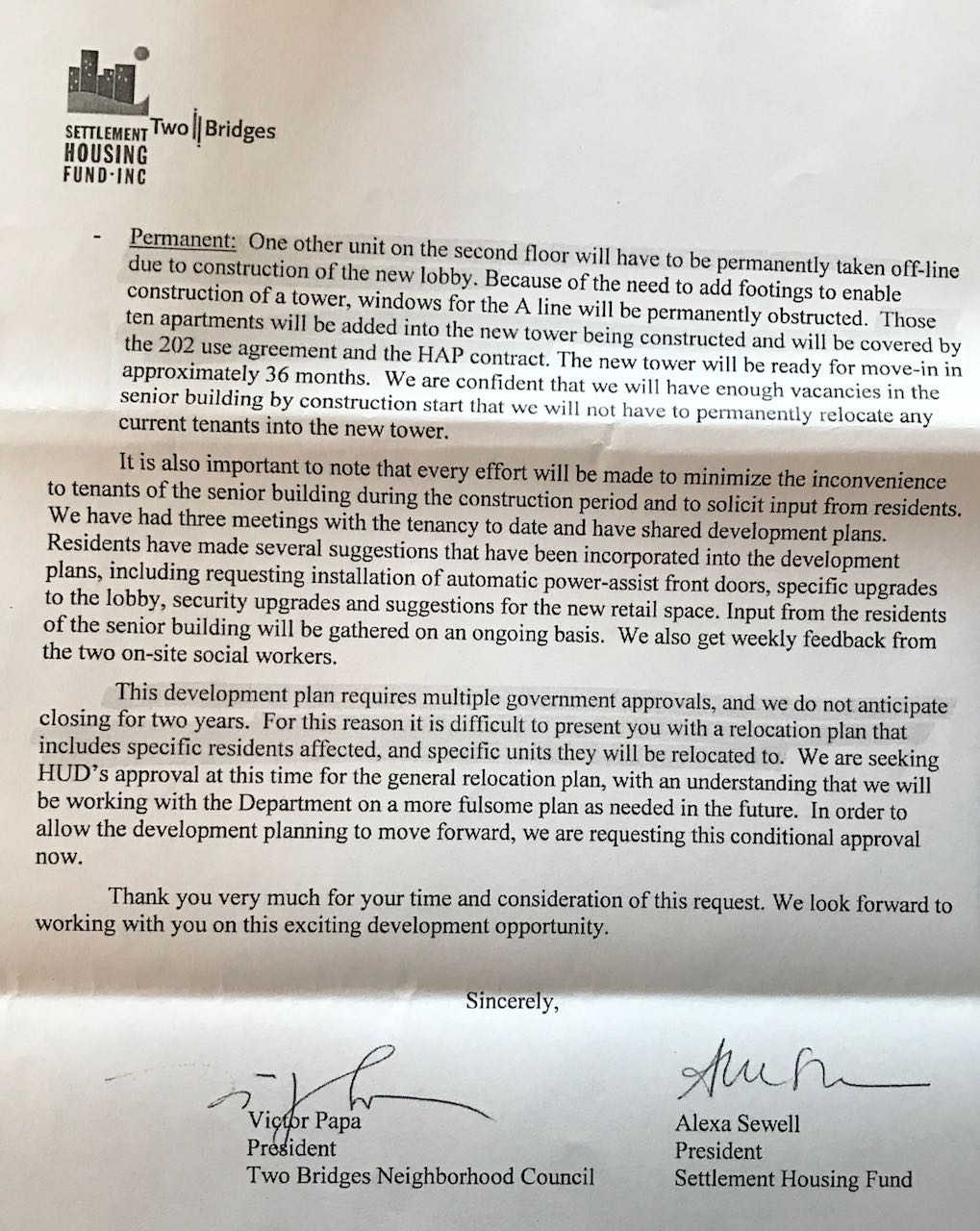 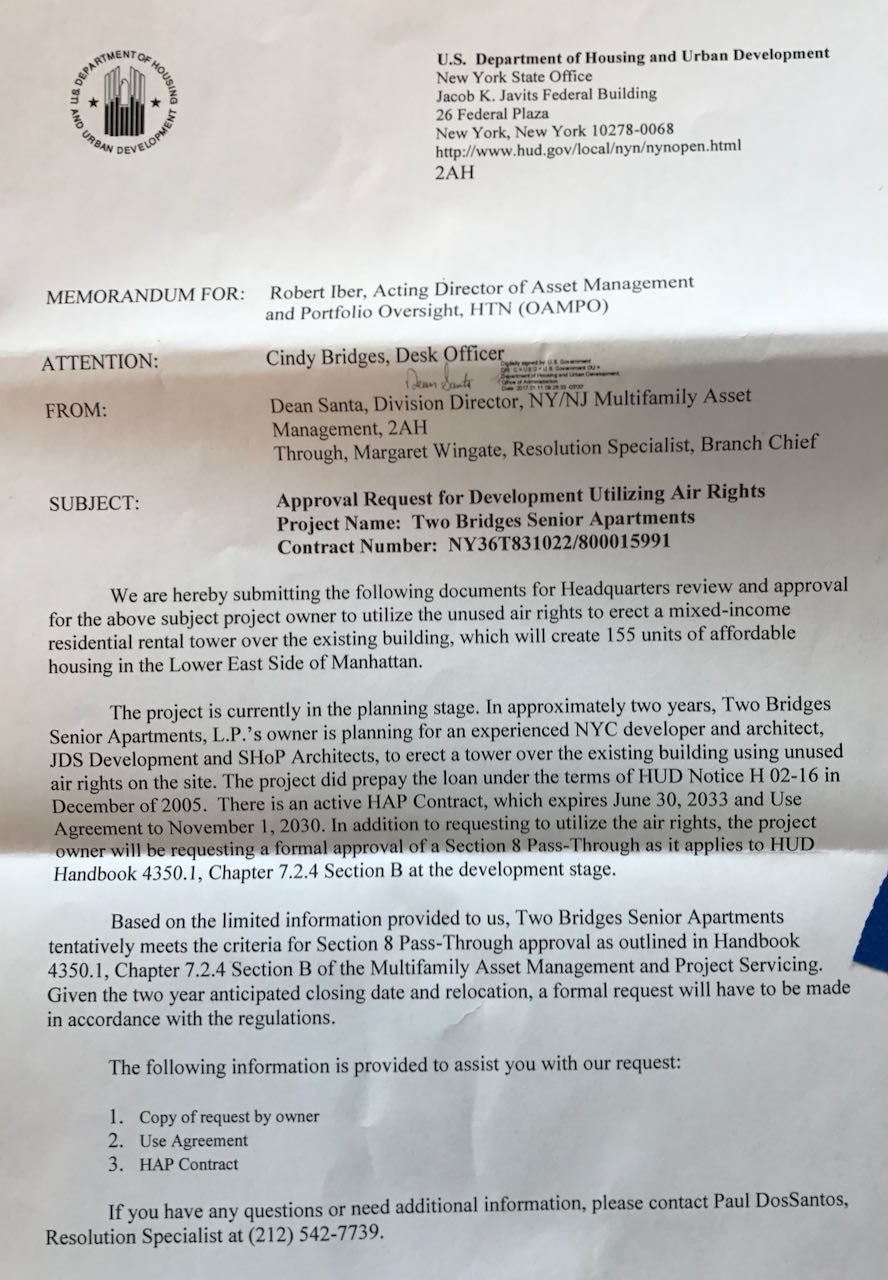 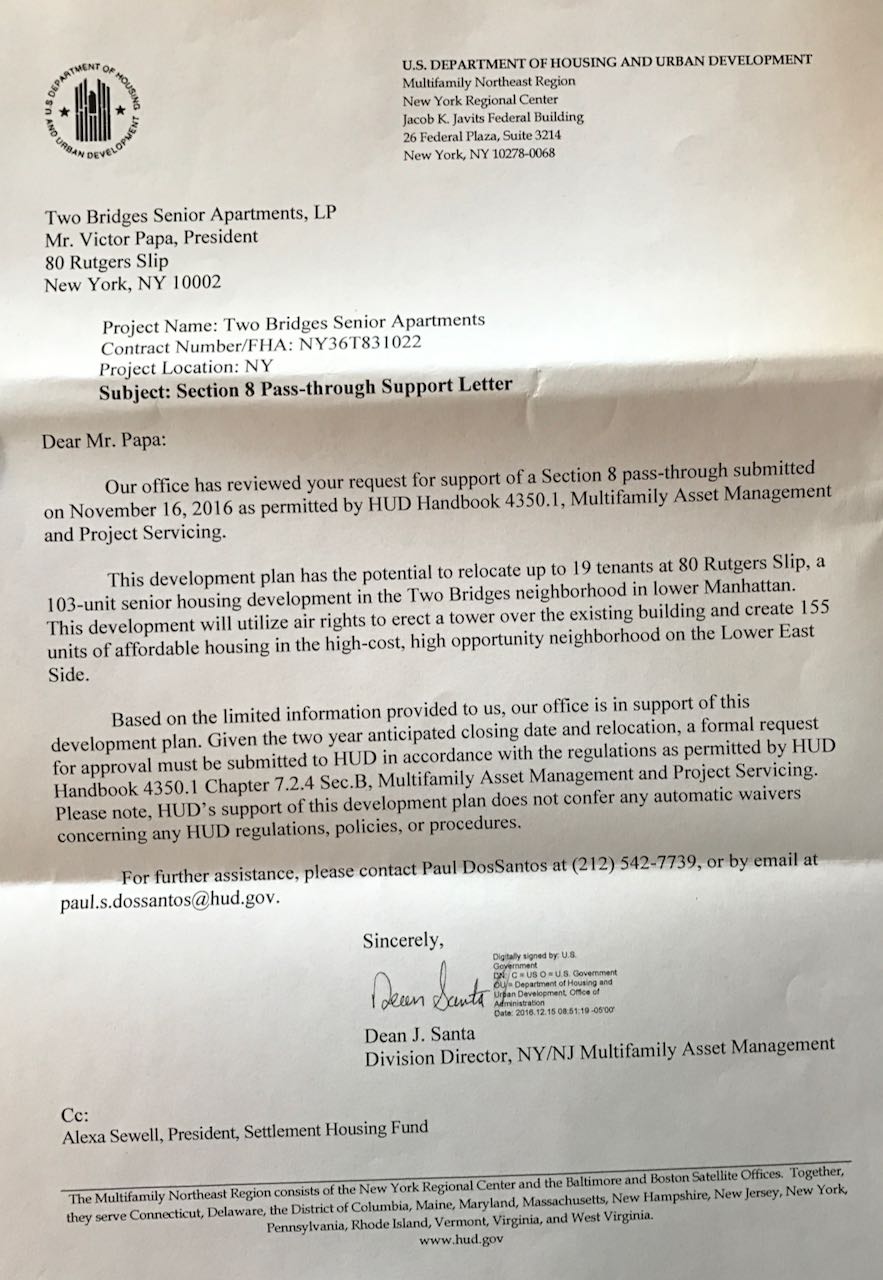 Do you have an opinion about this story? Join the conversation on our Facebook page.