Belraf Fabrics will be closing its Orchard Street store on June 30 after 33 years on the Lower East Side, and the owners are offering bargain prices until then.

Once upon a time, of course, there was a slew of fabric stores on Orchard Street, but only a handful remain, and Belraf Fabrics is the latest to close up shop.

The owners, Bella and Raf, moved to the Lower East Side four decades ago from Uzbekistan. After about five years selling women’s sportswear at flea markets around the city, the couple decided to upgrade. During a recent visit to the store, Raf talked about their beginnings as neighborhood shop owners. There was an “old man” who owned a fabric store at 112 Stanton St., and Raf offered to buy it from him. At first the store owner’s message was clear: “It’s not for sale.” But eventually he was ready to sell, so Bella and Raf took over in 1983, renaming the store Belraf – a combination of their first names.

In the beginning, Bella and Raf would buy leftover fabric from now-legendary fashion brands – Ralph Lauren, Liz Claiborne, Donna Karan – and sell to LES residents and smaller-name designers. One of their early customers was a young woman named Camella Ehlke, who in 1989 founded iconic streetwear brand Triple 5 Soul at 151 Ludlow St. – half a block away from Belraf Fabrics.

Their current lease expires at the end of June and the rent will likely go up once again, but Raf says they’re also ready for retirement. Most of the designers they used to buy excess fabric from have moved their manufacturing overseas. “I can’t get my leftovers,” which makes it harder to give people bargains, Raf said. “It’s no fun anymore.” 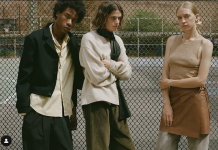