In profiling David Owens Vintage in the spring of 2014, we noted that the 13-year-old shop had staying power, persevering while so many other boutiques had shuttered. Recently, Owens showed a little bit of that resourceful spirit upon being driven out of his space at 154 Orchard St.

The shop has now relocated to a smaller space at 164 Rivington St., near Clinton Street. Linda Lavalle, Owens’ wife, explained to us what happened in the original location. She said the property owner suddenly levied a large property tax bill on top of the rent that they had already paid.  “We decided to move to a less expensive storefront,” she said. “We did not want to be paying rent in addition to the large tax bill…”

Lavalle added, “We’re hoping to make a go of it in the new location. I see us independents as a dying part of retail culture in NYC.”

The building owner on Orchard Street is Abraham Noy of Helm Management.  The Rivington space was previously occupied by Narnia, a vintage shop that closed after 13 years to focus more attention on a Brooklyn location.

We’re devoting a year to sustained coverage of small business survival on the Lower East Side. Click here to see all of our coverage of this important topic. 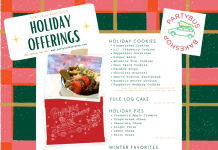