Thanks to Paul Cackler, who sent along these photos of Chen Guanming, a farmer from Eastern China who is traveling  on his old rickshaw from his home in Tong Shan to the 2016 Olympic Games in Rio de Janeiro, Brazil.  He caught up with the determined cyclist on East Broadway, near Essex Street, after the world traveler rode through the historic heart of Chinatown a few blocks to the west.

In 2008, Guanming rode his rickshaw to every major Chinese city before ending up in Beijing for the Olympics with his message of world peace and harmony. Then in 2010, he made a journey to the London Olympics, passing through 18 countries along the way. During Guanming’s most recent trip, he’s stopped in London and Canada. If you’d like to follow his trek, check out Guanming’s Facebook page.

Paul noted in his email to us: “He’s really friendly, in great spirits, and has a super cool… tricycle. Check out the unique frame (complete with what I assumed is a parking brake), and the hand-made leaf spring and coil suspension in the back. Really inspiring guy. Attracted quite a crowd of passersby.” 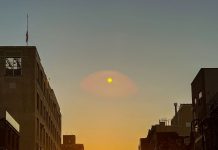