Lower East Side food fiend Mitch Weinstein has a message for the restaurants of the Lower East Side: close the windows and doors! Here’s the latest post from his blog, Tasty Travails:

Restaurateurs – listen up. I have one word for you…Friedrich.

Allright, admittedly, I’m a grouch…just ask Significant Eater, our friends, family, anyone I come into contact with, whomever. But, something happens every summer, and it doesn’t make me happy. That is, either restaurants in the city are not turning their air conditioners on at all or they’re greatly lowering the amount of conditioned air they’re sending out.

I mean, there was a summer night not too long ago when SE and I were looking for a place to eat; have I mentioned that I also don’t cook that much in summer? So we walked over to this wine bar on Broome Street called The Ten Bells (which, btw, looked cute and fun with a nice menu and gentle prices) and its windows were flung open to the street – meaning, hey, I’m not eating there. Or drinking, for that matter. Because, you know, it’s not bad enough that it’s a million degrees in your friggin’ restaurant, but the view of the garbage bags on Broome is just not my thing. I mean, it’s not exactly the Piazza Navona, is it?

Then, walking further west, we got to Kampuchea (the restaurant, not the city) – and guess what? Windows flung open to the street – meaning, hey, I’m not eating there either. And finally, walking back east to ‘inoteca, whose windows were blessedly closed and whose A/C was on…along with a nice bottle of vin rosato to add to the chill, it’s where we contentedly ended up with only a 30 minute wait.

Just this past weekend, some friends stopped by for “a” cocktail, so after a few drinks we decided to go to An Choi on Orchard Street for some Vietnamese food. Guess what? Windows thrown open to the street, no a/c on – oy. Because I’m the nice guy that I am, we ate there anyway, and I only complained a little. I mean, the food is decent enough and the waitresses were wearing what could best be described as beach wear, so wtf.

Now, you gotta understand, during the winter I’ve eaten in restaurants in this city that have portable heaters set up inside. Eaten while wearing my coat. Eaten while freezing. But, there’s only so much clothing one is allowed or encouraged to take off – and trust me, I’m not going that far and no one is encouraging me. And it wouldn’t help. New York in mid-summer is basically disgusting – hot, humid, smelly…everything you think it would be. And I love it – New York City, that is…but I want air conditioning when I’m spending hard earned money for lunch or dinner in your restaurant.

It also seems that restaurants which still have that beloved a/c on seem to be edging their thermostats higher – obviously, everyone is feeling the energy squeeze as the price of heating and cooling eat into a restaurant’s profits, but if you’re charging me $16 for a damn hamburger, cool the room, zippy.

So, does anyone else notice this – or is it just the grouch in me? Or, maybe it doesn’t bother you at all (perhaps you’re from the equator? Or Mercury?) Please, tell me I’m not the only one.

And it’s not like I’m really wishing for this, but there are times… 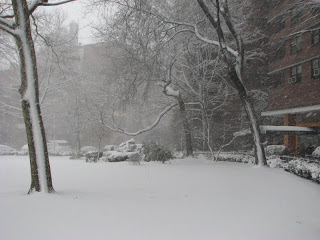 Mitch Weinstein has his own blog, Tasty Travails.