Editor's note: The following post appeared this past summer on Tasty Travails, the blog written by Lo-Down food contributor Mitch Weinstein. One of the great things about living on the Lower East Side is, of course, our proximity to Chinatown. As Mitch illustrates so vividly, cooking Chinese at home (using some of the fantastic ingredients available in the neighborhood) is often more satisfying than eating in a Chinese restaurant. 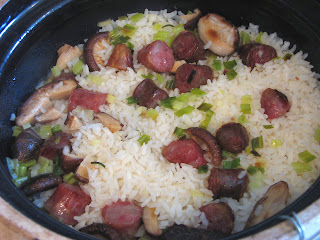 Even though Significant Eater and I live within walking distance of
literally dozens of Chinese restaurants, I often prefer cooking
"Chinese food" at home rather than going out for it. Mostly it's
because of the dozens of restaurants that we might walk to, in general
they suck. They're slophouses for the masses – inexpensive food
prepared from less than the highest quality ingredients. It's a shame
really, because Chinese food, when prepared properly from high quality
ingredients, is great cuisine.

Now,
don't get me wrong…when I want a bowl of hand-pulled noodles or
perhaps some roasted duck wonton noodle soup, I'm heading out and
spending the under $10 that it'll cost me (Great NY Noodletown, if you must know). Dim sum – you'll see us at Chinatown Brasserie,
where the dim sum is masterful. There's no getting around that, and I
can't really reproduce that stuff at home – at least not without a fair
amount of procurement, time and work, and it still won't be as good as
what I get by heading out for that walk.

However, there are
certain things (a lot of things, actually) that I make just as well as,
if not better than, that which can be found in restaurants in
Chinatown. The other day for lunch I did just that – and I started with
my trusty old clay (or sandy) pot… 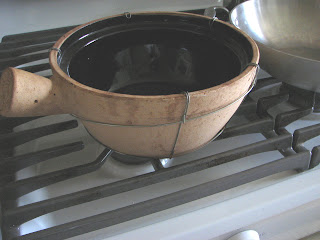 This
sandy pot is a great little pot for preparing slow cooked, stove-top
braises, as well as for some damn tasty rice dishes – and I did just
that, taking a few varieties of Chinese sausage (duck and pork liver),
along with a couple of soaked, dried shitake mushrooms, a bit of
garlic, ginger and scallions along with a cup and a half of medium
grain rice, 2 cups of water (chicken stock is even better, or maybe
some of that mushroom soaking liquid) and cooking it all together. I
did start by first frying the sausage and aromatics and then adding the
rice and liquid…it didn't look like much at the outset… 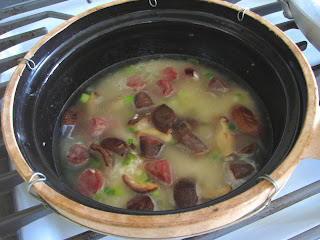 but
after you've brought it to a boil, covered it, lowered the heat and let
it simmer for about 18 minutes, it looks really tasty, don't you think?

Of
course, man…and certainly not Significant Eater, does not live by
rice alone – even if it comes with 2 kinds of sausage, mushrooms, etc.
And no self-respecting Chinese person would ever just eat rice for a
meal, now would they?

So, to go along with the rice, I happened
to have a piece of poached pork butt, which is perfect for twice-cooked
pork, a Szechuan specialty. Earlier that morning, I had walked up to
the corner to buy some fruit and veggies (that's the real plus about
living at the edge of Chinatown), and I had picked up some beautiful
baby bok choy for the low, low price of $1 a pound. Along with a bright
red pepper, and using ingredients that I always have on hand ( a few
kinds of soy, chili paste with garlic, Shaoxing wine, the
aforementioned ginger, garlic and scallions), my twice-cooked pork and
fancy steamed rice were on the table in under an hour. And SE and I
thought they were both much better than we could have gotten at any
restaurant in Chinatown! 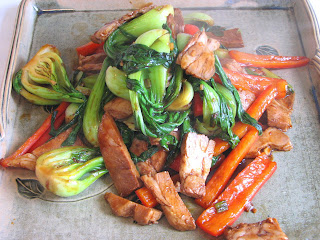 For More of Mitch Weinstein's musings about food on the Lower East Side, visit his blog, Tasty Travails.