This is really two stories in one. As you might have deduced from the headline, it’s about the historic Streit’s Matzo Factory — their building on Rivington Street has gone on and off the market a couple of times in recent years. Alan Adler, the company’s director of operations, confirms they “have no plans to move.”  This post is also our way of introducing Mitch Weinstein, the guy who’s about to give us a really interesting inside look at the Streit’s factory.

Mitch, who’s been a LES resident for a few years, runs a teriffic blog called Tasty Travails. Unlike a lot of the other food blogs out there obsessing over New York’s restaurant scene, Mitch is focused on, well, food. He helps his readers navigate the wonderful but sometimes bewildering ethnic food markets in the neighborhood. Just as important, he actually explains what to do with all of those treasures once you get them home. Mitch is a native New Yorker who spent 18 years in California before returning to the city to attend cooking school. He’s cooked in restaurants, done some catering and worked as a personal chef. These days he’s mostly cooking for friends and family. He’s also a volunteer host of the food web site eGullet.

We’re thrilled that Mitch has agreed to share some of his food aventures with us. We begin with a post he wrote earlier this year on what really goes on inside the Streit’s Factory. You can read it after the jump.

A while ago, my friends johnder and donbert (who took these photos) and I were walking on the lower east side, when we passed Suffolk and Rivington Streets. At that intersection sits the famous Streit’s Matzo Factory, still cranking out matzos by the, well, ton, since 1925.

The cool thing about Streit’s is that you can peek right into the oven discharge room, as the windows are open when they’re baking (because it’s about 1000 degrees in there). So, we did…(and beware of shitty, cell-phone, night-time photos ahead)… Now, the matzos come out of the oven fast – I mean, like, hundreds a minute on a conveyer belt – it reminds me of the infamous I Love Lucy episode with the chocolate candy assembly line – only these guys can move some matzos. The first guy takes the matzos, places them into stacks that will fit into the box, and moves them to the cooling rack – which is in constant motion and is on the far right in the above photo. I started asking the guys for some matzos and we got a much better view – you can see the sheets of matzo coming out of the oven in the photo below, which is taken from inside the factory. The guy with the headphones is, I think, a stacker. 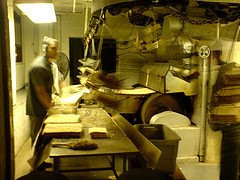 In addition to our brief tour, we each were rewarded with a still hot from the oven, world-famous Streit’s matzo – real NYC street food, as you can see from this photo, taken at the famous corner of Suffolk and Rivington. 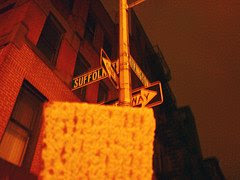 Now, I don’t know how many people have tried matzos, or like matzos. Or even put up with matzos. I mean, like don’t you eat them because you have to, on Passover? There are all sorts of flavors of matzos now, not like when I was a kid, when you had two choices: plain or egg. These were plain. Not everything, not salt, not sun-dried tomato, not friggin’ blueberry, nothing – plain.

A hot from the oven matzo stays hot for about one minute on a chilly night. And it’s good for about one minute – I mean, without butter, cream cheese, salt, etc. it’s basically a bad cracker. The bread of affliction. Enjoyed and then discarded. Perfect for a minute, and only in NY, kids.